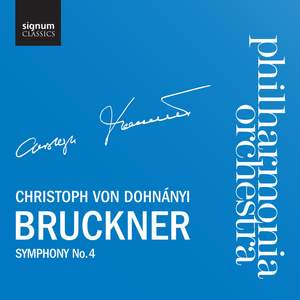 The Royal Festival Hall perhaps doesn't offer the kind of spacious acoustic most suited to Bruckner's orchestration...Nonetheless, this is a largely enjoyable performance — BBC Music Magazine, September 2012, 3 out of 5 stars More…

Continuing Signum’s series of live orchestral releases with the Philharmonia Orchestra, on this new disc Christoph von Dohnányi leads a performance of Bruckner’s Symphony No.4, 'Romantic'.

Bruckner stands out from other 19th-century symphonists; his large-scale works demonstrate a unique fusion of conservative and radical elements, notably influenced by composers such as Wagner and Beethoven. He appended not only the title ‘Romantic’ but even included a programme for the Fourth Symphony, sometime after composition. Though he later withdrew it, the scenario is a mediaeval Romantic ideal, where knights awaken to the sound of horns, rejoice and repair to prayer, before the inevitable hunt and ensuing festivities.

The Royal Festival Hall perhaps doesn't offer the kind of spacious acoustic most suited to Bruckner's orchestration...Nonetheless, this is a largely enjoyable performance

There's much worth celebrating on this excellent new (or newish) recording of Bruckner's Fourth Symphony...Dohnanyi has a convincing take on the way the Fourth's arching phrases function in relation to its rhythmic aspect, so that while the string lines soar, the brass and timpani help focus the score's structural foundations

By graduating both dynamics and intensity, von Dohnanyi studiously avoids that sense of periodic hiatus less attentive interpreters can often convey. The result is that the performance possesses a compelling feeling of being a singular rather than a disparate organism.