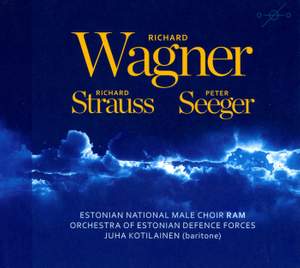 The Estonian National Male Choir RAM was founded by the grand old man of Estonian choral music Gustav Ernesaks in 1944. Initially a male choir, specialized on a cappella repertoire, has by today grown into a world-famous professional performer of oratorial works. The choir makes regular recordings for the Estonian Public Broadcasting as well as releases annually CDs under the labels of Deutsche Grammophon, Sony, Warner Classics / Finlandia Records, and Virgin Classics. RAM has given more than 6000 concerts all over Estonia, in the former USSR, in Europe as well as in Israel, Canada and the USA. Currently the choir employs 49 singers.

The Orchestra of the Estonian Defence Forces is a state ceremonial orchestra founded on February 1st, 1993, or more precisely, it was re-established together with the re-establishment of the Estonian Defence Forces after the country had regained its independence. Since 1996, its commander and chief conductor is lieutenant-colonel Peeter Saan. The main task of the orchestra is to perform at all state and military ceremonies as well as receive and see off high-standing state visits and guests. The orchestra gives concerts in military units as well as public concert halls. Initially comprising a staff of 20 musicians, the orchestra today employs 40 professional musicians.