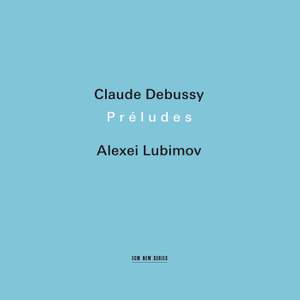 Debussy's use of pianistic colour is absolutely central to this tremendous set from Alexi Lubimov. He uses the characterful sonorities of two pianos from close to Debussy's time...not claiming... — BBC Music Magazine, July 2012, 5 out of 5 stars More…

Russian pianist Alexei Lubimov, recognised as an outstanding advocate of post-Soviet composition – performing Schnittke, Pärt, and Silvestrov amongst his acclaimed ECM New Series recordings – now turns his talents to Debussy in the year of the 150th anniversary of his birth. On this 2-CD set Lubimov plays both books of Préludes and, with his young student Alexei Zuev, the Trois Nocturnes in Ravel’s two-piano transcription as well as a two-piano arrangement of Debussy’s seminal orchestral masterpiece, Prélude à l’après-midi d’un faune.

Debussy decried the concept of musical impressionism because he feared, rightly, that superficial refinement would degenerate into musical mist, concealing the subtleties of a new musical idiom and its structural logic. So, for example, instead of heading his 24 Préludes with programmatic titles, he appended them at the bottom of the individual pieces. Even though their popularity makes it almost impossible, perhaps listeners ought simply to forget about the titles and recall something else that Debussy once said: “Music is a free art gushing forth, an open-air art boundless as the elements, the wind, the sky, the sea.” It is in this manner – sans rigeur, as Debussy repeatedly marked his music – that Lubimov performs the Préludes.

Searching for an inspiring special sound – he wanted to hear Debussy in a different timbral guise, cloaked in early 20th-century colours – Lubimov “stumbled on two excellent pianos that truly seduced me and breathed fresh life into the music. The stunning beauty and nobility of their sound and their highly distinctive voices prompted me to find new solutions and gave me new levels of pleasure. I decided to record the two volumes of Préludes on two different pianos: a 1925 Bechstein (clear, sharply etched, translucent and light, even in complex textures) and a Steinway from 1913 (divinely soft in pianissimo, resonant and marvellously suitable for unexpected colours). It is said that the great Polish pianist Paderewski chose this Steinway and played it in his recitals.”

Debussy's use of pianistic colour is absolutely central to this tremendous set from Alexi Lubimov. He uses the characterful sonorities of two pianos from close to Debussy's time...not claiming historical fidelity, but simply exploring the timbres of the early 20th-century piano. And what an exploration it is, for the instruments allied to Lubimov's individuality bring the pieces alive in ways that are by turns mesmerising, thrilling, beguiling and playful.

Everything Lubimov plays is thought through in depth and mature, musicianly detail, so that the performance never sounds intellectualised or manicured. To the two books of Préludes he brings a variety of nuance and colour that is the very opposite of processed piano-playing

an unusually subjective engagement that transcends an acute observation of the score...In addition, I very much like ECM's minimalist cover, excellent presentation and sound quality, lending the whole release a satisfying integrity.

This is a recording which starts out being about the instruments on which it is played, and ends up being more about the music than anything else...this is a set to treasure and avoid getting covered in coffee stains and fingerprints at all costs. It commands respect and oozes quality on all fronts, and I’m already shortlisting it for disc of the decade, let alone the year.

Lubimov plays a 1925 Bechstein for Book 1 and a 1913 Steinway for Book 2. The earlier piano has, perhaps, a subtler range of colours than the later one, and retains a lovely silvery edge at full stretch. The Bechstein’s clarity, pleasing in a different way, brings out more of the Russian in Lubimov, everything up front rather than internalised.

Debussy's piano repertoire is not a novelty on disc but there is an intriguing back story here: Russian pianist Alexei Lubimov came across two old pianos which inspired a new, more authentic "period instrument" approach to Debussy's Préludes...The results are at once fresh and enigmatic.

Lubimov presents vividly characterised, spacious readings on two different period instruments...Essential listening for anyone wanting to hear these works in a new light...Half archaeology, half artistry; all pleasure!