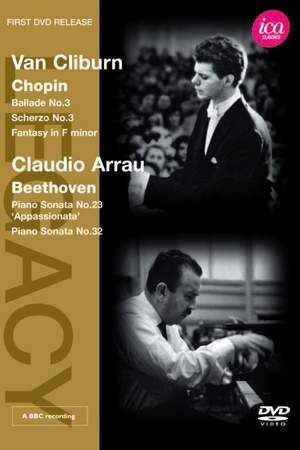 Effortless Chopin...forming a dramatic contrast with the concentrated intensity of Arrau in Beethoven's sonatas Nos. 23 and 30 — BBC Music Magazine, September 2012, 4 out of 5 stars

As winner of the inaugural Tchaikovsky Competition in 1958, Van Cliburn was lauded by the greats, including Shostakovich, Gilels and Sviatoslav Richter, who is said to have proclaimed ‘he is a pianist, the others are not’.

The three Chopin performances on this DVD were filmed by the BBC just one year later, when Cliburn was still very much in his prime. His performances of these three popular Chopin works exude controlled brilliance – grandeur and virtuosity without ostentation.

Cliburn’s album entitled ‘My Favourite Chopin’ topped the Billboard charts for 37 weeks – it was the first classical LP in history to sell more than one million copies. The album eventually exceeded triple platinum.

Claudio Arrau, recognisable for his rich, sonorous tone and often described as ‘Prince’, ‘Emperor’, and ‘King’ of the keyboard, is an excellent companion to Cliburn on this DVD. Widely considered one of the greatest pianists of the 20th century, he was renowned for his definitive interpretations of almost every composer he engaged with, although he remains most celebrated for his Beethoven.

A recording of Arrau’s ‘Appassionata’, released in 1961 on Columbia, was reviewed in Gramophone at the time as ‘cogent, powerful and dramatic, and sure both in its grasp of the music and in the technical execution of it’.

The recording of Beethoven’s Piano Concerto No.4, released on ICA Classics in November 2011, was made just six months before this studio performance. Reviewing this disc on www.classicalsource.com, Colin Anderson praises Arrau’s ‘generous, thoughtful and poetic style’ and ‘purest pianism’.

Effortless Chopin...forming a dramatic contrast with the concentrated intensity of Arrau in Beethoven's sonatas Nos. 23 and 30