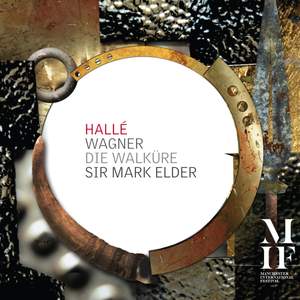 Elder is the driving force, with an approach that's powerfully measured and beautifully detailed, nowhere more so than in Act 1. His cast is also excellent...[Howard's] nervy, vulnerable Sieglinde... — BBC Music Magazine, August 2012, 5 out of 5 stars More…

Act I, Scene I, "Was Herd dies auch sei" (Siegmund)

This is the latest release in Elder and Halle’s stunning Ring cycle and was recorded live at sell out Bridgewater Hall concerts which formed highlights of the 2011 Manchester International Festival. The performances received stunning reviews, including:

"The Hallé excelled in supporting the human voice, lifting the vernal lovesong of Siegmund and Sieglinde in a light lilt … The cast was outstanding."

"[The Hallé’s] Wagner is simply beautiful, and if that burnished lyricism was more glamorous than dangerous in Act I of Die Walküre, the duet with Siegmund (Stig Andersen) and Sieglinde (Yvonne Howard) had a tenderness beyond renegade intoxication. Elder is a skilful accompanist, metering the blend to suit the timbres of his cast … [he] conducted as though in love with a score that was in love with love itself."

The recording features soloists of the highest calibre, perfectly cast by Elder who displays his opera credentials and achieves performances which are both moving and dramatic. The recordings were made from live performances, as part of the Manchester International Festival, in the Bridgewater Hall Manchester in July 2011.

Elder is the driving force, with an approach that's powerfully measured and beautifully detailed, nowhere more so than in Act 1. His cast is also excellent...[Howard's] nervy, vulnerable Sieglinde is beautifully sung...Bullock's initially girlish, bright-toned Brunnhilde acquires heroic stature so swiftly that one ignores her minor moments of strain...This special recording knocks spots off anything we've had from the continent in recent years.

Elder conducts with tensile strength and a really impressive sense of dramatic and musical architecture, drawing playing of thrilling immediacy and detail...[Andersen's] dramatic involvement, the pure unforced gleam of his tone and his fine sense of line all help to make this a powerful musical experience...Silins can (and does) sing with great tenderness and expressiveness...Elder's Halle Wagner is some of the best around at the moment.

The performance is very much an interpretation, with Mark Elder imprinting his musical personality on every phrase...There are no huge names in the cast, which ironically helps to maintain consistent quality between the singers. Every one of them is equal to Wagner's challenges...here's hoping that the resources and opportunities will be found for a Rheingold and Siegfried in the same series. Should they materialise, this could become one of the great Ring cycles of our times.

the orchestral playing is richly nuanced, never hurried, alert in detail. Stig Andersen and Yvonne Howard express blazing urgency as Siegmund and Sieglinde, with Clive Bayley a masterful, brutal Hunding. Egils Silins's Wotan is tender and anguished in his farewell to Brünnhilde. Loge's fire music burns with slow intensity, no mere sparkler but an all-consuming furnace.

hugely impressive...Elder’s conducting emphasises the score’s romantic grandeur through the cultivation of a rich, deep orchestral sound and firm, even stately tempos which build tension over the long arcs of each act...At a bargain price, this is something that can be recommended to every true Wagner fan.

a magnificent achievement, thrillingly played and gloriously sung...Elder takes his time, perhaps too much time, over Wagner’s more sumptuous passages, especially in Act II; yet the sense of drama never flags.