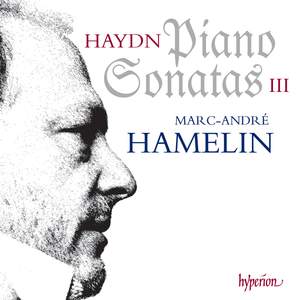 the playing is outstanding for its crystalline tone, springy rhythms, lively tempos and integral handling of ornamentation...Hamelin is often at his most brilliant where Haydn is at his most... — BBC Music Magazine, July 2012, 4 out of 5 stars More…

Hyperion’s Record of the Month is the third double-volume release in Marc-André Hamelin’s much-praised series of Haydn’s keyboard sonatas. Haydn wrote around sixty keyboard sonatas and this selection of eleven focuses on those from the 1770s, including the great C minor sonata from the composer’s ‘Sturm und Drang’ period, with its dynamic contrasts and virtuoso demands. These are bookended by three from Haydn’s earliest output from the 1750s, most likely penned for his young female pupils to play, and the D major sonata written during the second of the mature composer’s triumphant London visits in 1794.

In all these fascinating, idiosyncratic works, Marc-André Hamelin wears his renowned virtuosity lightly, while playing with understated wit and the elegant, immaculate musicianship that has come to define one of the greatest pianists of our time.

the playing is outstanding for its crystalline tone, springy rhythms, lively tempos and integral handling of ornamentation...Hamelin is often at his most brilliant where Haydn is at his most eccentric

the majority of the sonatas, with their volte-face humour and open-hearted delight in the unexpected, reflect a joy in compositional wizardry. Such qualities are dazzlingly articulated by Hamelin, with one performance after another of crystalline brilliance and musicianship...These are magnificent performances and clearly a prime love for Hamelin.

The most immediately striking feature of the set is the unfailingly superb, crystalline clarity of Hamelin's sound...Here no detail is obscured and, with the exception of certain legato ligatures that Hamelin consistently chooses not to observe, articulation is within the realm of what Haydn's notation suggests...There is a certain stylistic cohesion to all these performances: everything is unmistakeably stamped 'Hamelin's Haydn'.

Hamelin’s fluency amazes but is never ostentatious...Slow movements are delicately coloured, and there’s never a hint of indulgence. Hamelin lets Haydn do the talking.