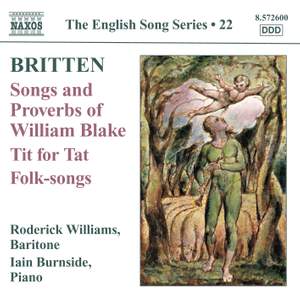 I. Proverb I: The pride of the peacock

XIV. Every Night and Every Morn

No. 1. A Song of enchantment

Tom Bowling and Other Song Arrangements: No. 1. Tom Bowling

No. 1. The Salley Gardens

Britten wrote his Songs and Proverbs of William Blake, Op. 74 for the German baritone Dietrich Fischer-Dieskau in 1965. The singer admired the ‘concentration and enigmatic smile’ of the settings, and Britten constructed, through alternation of proverbs with songs, and an intense contemplation on the human and the eternal, one of his greatest song cycles. By contrast Tit for Tat sees Britten revisiting youthful, light-spirited settings of the poet Walter de la Mare. The folk-song arrangements are amongst his most famous, and beloved.

Britten’s song cycles are some of the greatest produced in the twentieth century. This disc focuses on his Blake cycle, one of his deepest and most contemplative. It’s contrasted with a very different and youthful cycle of five called Tit for Tat, written when he was a teenager.

The baritone Roderick Williams encompasses a wide repertoire, from baroque to contemporary music, in the opera house, on the concert platform and in recital. His recital appearances have taken him to London’s Wigmore Hall and many European festivals. He has an extensive discography and his recordings of English song with Iain Burnside have received particular acclaim.

Williams brings a gentler, more intimate touch to what Fischer-Dieskau called their 'enigmatic smile': Blake's Tyger burns bright but with less fierce teeth, and there is more melancholy than menace in this performance's view of the human condition. Every beautifully placed word is matched by Iain Burnside's recreation of Britten's pianistic subtext, glinting with many a revealing musical gloss.

this sombre, discomfiting song-cycle [the Blake settings] remains a strikingly modern-sounding work, thanks partly to Blake’s existential poetry and aphoristic proverbs. Williams illuminates the text, but it’s a relief to move on to Britten’s boyhood settings of Walter de la Mare

Williams finds an ideal emotional stance - involved, totally word-conscious but never melodramatic...as a recorded recital, Williams - and Burnside, who is similarly colourful but keeps an interpretative distance from pumping up the text - have created an outstanding achievement.

It would be easy to exaggerate the claims of these songs [Tit for Tat], but presented so cleanly and with such understanding as do Williams and his superb pianist, Iain Burnside, they make just the effect the mature composer surely intended.

Williams's voice is lighter than Fischer-Dieskau's, but his response to the texts is so intense, so well judged that there is never a lack of authority. The juvenile Walter De la Mare settings of Tit for Tat provide the perfect foil, followed by some of Britten's best-known folksong arrangements, all beautifully delivered without a trace of archness.