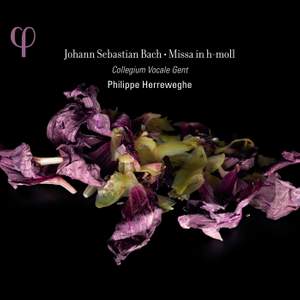 Herreweghe's account proves outstanding. The Collegium Vocale Gent, from which the soloists are drawn, is numerous enough [to] create warm lines, contrasting with the crisper tone of the instruments... — BBC Music Magazine, July 2012, 5 out of 5 stars More…

Peter Sellars’s ‘ritualization’ of the work with Simon Rattle conducting the Berliner Philharmoniker packs a powerful punch, thanks in no small part to Mark Padmore’s harrowing central performance as the Evangelist.

"If at first you don’t succeed, try, try again”. Philippe Herreweghe’s longlasting interest in the works of the Cantor of Leipzig has turned him into a man whose views evolve as he delves deeper into his subject matter. The joy that he feels – combined with a very legitimate sense of pride – in having forged musical tools that have today reached maturity, has led him to come back on a Missa that has never ceased to intrigue him: the catholic Missa of the protestant composer Bach.

Last spring, theJesus-Christus Kirche in Berlin came alive with the splendid sounds of Bach’s score as preceding recordings of the Missa no longer met the radiant vision that the Flemish maestro had of it. Together with a handful of excellent soloists – included in the choir – and a Collegium vocally and instrumentally at its best, Philippe Herreweghe delivers a work that must be savoured like a sweet or a last supper where rigor and hedonism, inner depth and outer seduction tenderly offer themselves to the listener.

Herreweghe's account proves outstanding. The Collegium Vocale Gent, from which the soloists are drawn, is numerous enough [to] create warm lines, contrasting with the crisper tone of the instruments - I've never heard Bach's counterpoint more transparent. The balance between blend and individuality is superb, their empathy palpable...Its very moderation makes this a wonderful recording - highly recommended.

This is Philippe Herreweghe's third commercial recordings of the Mass in B minor in 23 years and, unlike many conductors who serially return to cornerstone pieces, his finest to date...Herreweghe is a master of when to fill the sails and when to trim them...Atmosphere is ultimately what places Herreweghe's new reading in the higher echelons...This account is one of the most consistent in recent years.

given that this is a B minor Mass which exudes buoyancy, freshness and vitality, what are the drawback? The simple answer is: very few. Perhaps at times both the orchestral support and the vocal weight is a shade too light for some of the more weighty moments...As for the highlights, these are too numerous to list...This certainly stands as Herreweghe's most arresting reading of the work so far.

the clarity of the singing is really delightful; one is reminded, not for the only time in this performance, how much Bach’s music is founded in the dance...Whatever your standpoint, unless you are allergic to period-style performance of Bach then I would urge you to hear this marvellous new recording.