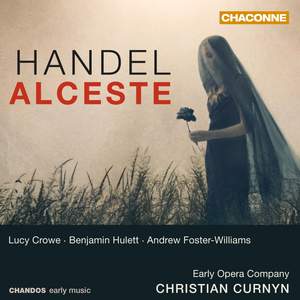 Curnyn's delicious recording of the surviving score is amplified with a sinfonia from Admeto and a passacaglia from Radamisto. These fizzily, sexily swung orchestral additions emphasise the parallels... — BBC Music Magazine, July 2012, 5 out of 5 stars More…

Symphony and Accompagnato: He comes, he rises from below (Tenor)

Recitative: From high Olympus' top, the seat of God (Tenor)

Triumph, thou son of Jove (Chorus)

Recording of the Week,  Handel in England

The Edinburgh-based Dunedin Consort record Esther, Christian Curnyn and the Early Opera Company make a fine case for the incidental music for Smollett’s Alceste, and a legendary Glyndebourne Theodora makes its first appearance on CD.

This recording of Alceste is performed by the Early Opera Company and Christian Curnyn, whose other Handel recordings for Chandos have all received glowing accolades: Semele, for instance, was an Editor’s Choice in Gramophone and one of the Records of 2007 in The Sunday Times. The recording of Flavio was nominated for a Gramophone Award in 2011, in the Baroque Vocal category.

In Alceste, Admetus, the terminally ill King of Thessaly, is promised by Apollo that he can defer his premature death if another person volunteers to die in his place. Alcestis, the beloved wife of Admetus, bravely sacrifices herself to die in his place. The hero Hercules visits his grieving friend Admetus, resolves to travel to Hades, overpowers Pluto, returns Alcestis to the world of the living, and restores her to Admetus.

The production of Alceste was initially envisaged as an expensive collaboration between the Scottish-born novelist and playwright Tobias Smollett, the Covent Garden company of actors and singers, the theatre owner and manager John Rich, the prestigious composer Handel, and the elaborate scenery designer Giovanni Servandoni. However, soon after full rehearsals began, Alceste was aborted permanently for reasons that are unclear. One theory to explain the cancellation is that the lavishness of the production became too expensive for Rich to risk box-office failure – another is that the temperamental Smollett quarrelled violently with the theatre owner, who might have responded by cancelling the production. Whatever the reason behind the cancellation, Smollett’s abandoned script for the play was lost, and only Handel’s incidental music survives today.

Although Handel never performed his music for Alceste, he characteristically found plenty of practical uses for it.

He adapted several sinfonias, choruses, and arias to form the majority of the music for The Choice of Hercules, and several other numbers were later used in revivals of Belshazzar and Alexander Balus.

Curnyn's delicious recording of the surviving score is amplified with a sinfonia from Admeto and a passacaglia from Radamisto. These fizzily, sexily swung orchestral additions emphasise the parallels between Handel's incidental music and Purcell's music for King Arthur, The Fairy Queen and The Tempest...Alcestis's journey to the Underworld is enchanting, with Curnyn's fleet strings, intimately proportioned chorus, and polished soloists

Curnyn's lively and sensitive approach makes a strong case for this little-known score.

Curnyn and his trim period band give full value to the music's sensuous charm, phrasing alluringly in the slower numbers and keeping the rhythms lithe and springy...Andrew Foster-Williams is incisive without bluster in Charon's balefully cheerful 'Ye fleeting shades'. Benjamin Hulett is both mellifluous and athletic in his three arias, while Lucy Crowe displays her nimble coloratura technique in the frolicking 'Come fancy' and brings a limpid purity of line to 'Gentle Morpheus'

The score is of superlative quality and shows that Handel understood perfectly that for this quintessentially English theatrical impact the music had to make its impact immediately...Curnyn understands this too, and this performance has wonderful breadth...Crowe brings a gorgeous sensuality to ['Gentle Morpheus']...Hulett paces and phrases his short final aria 'Tune your harps' beautifully...Foster-Williams is impressively implacable in his single aria

[Hulett] impresses with his easy mellifluous voice, lovely sense of line and nice crisp ornamentation... if you haven't yet made the acquaintance of Handel's personable score, then this is the time to do so and this is the recording to go for.

Some of the finest music was written for the soprano...and Lucy Crowe is ravishing: it’s worth getting this disc just to hear her liquid middle register and hypnotic phrasing in the beautiful ‘Gentle Morpheus’. Andrew Foster-Williams is gleefully baleful as the infernal oarsman Charon, and Benjamin Hulett sings with distinctive tone and a fine sense of line in his three gorgeous arias.

agreeable sequence of music with one show stopper, Calliope’s Gentle Morpheus, which is the highlight here, as sung by Lucy Crowe, warmer and more sensual than the classic account by Emma Kirkby...[with] Curnyn’s choral and orchestral forces on sparkling form, the disc offers more than an hour of Handelian delight.

There's a real sense of ceremonial majesty in the choruses, and the solo singing is exceptionally fine. Benjamin Hulett tackles his exacting coloratura numbers with great elegance, while Andrew Foster-Williams has fun as Charon...Best of all, though, is Lucy Crowe, who gets to sing Gentle Morpheus, Son of Night, one of the most beautiful things in Handel's entire output