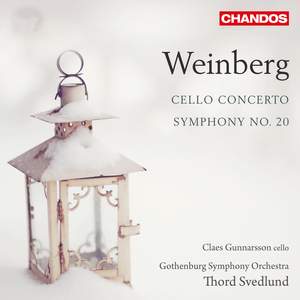 After the Second World War, along with many other composers, Weinberg was subjected to a series of campaigns against so-called Formalism in the Soviet arts. As a result he turned his attention to concertante works, a medium less prone to censure than symphonies, sonatas, and quartets. The first movement of the Cello Concerto shares the tense, pensive lyricism found in the opening Nocturne of Shostakovich’s almost exactly contemporaneous First Violin Concerto. This later gives way to the rhythms of a habanera and some impassioned passages of Jewish klezmer, almost as if to guarantee a healthy quota of folk-rooted intonations (a required antidote to charges of Formalism), while at the same time allowing for deeper emotions too.

In the 1970s, Weinberg’s symphonic production went in two distinct but complementary directions. One of these was at the patriotic end of the Socialist Realist spectrum, while the other was much more abstract. Weinberg’s highly austere five-movement Symphony No. 20 clearly falls into the latter category – challenging, perplexing, and unpredictable. In the second scherzo Weinberg quotes from his opera The Portrait, based on a short story by Gogol. In fact, the finale perfectly captures the mood of the opera’s closing scenes, in which the artist protagonist realises that he has betrayed his calling, and sinks into delirium and eventual death.

A previous volume in our Weinberg series (CHSA5089: Symphony No. 3 and Suite No. 4 from The Golden Key) was nominated for a Grammy this year, in the Best Engineered Album category.

Chandos's burgeoning Weinberg series goes from strength to strength with this latest stunningly engineered release featuring two works of strikingly different character...it would be difficult to imagine a more assured and committed performance than is provided by the Gothenburg Symphony under Thord Svedlund.

Claes Gunnarsson delivers a perceptive account of a work which could yet achieve well-deserved popularity...Thord Svedlund secures playing from the Gothenburg Symphony of an insight and commitment equal to that on the previous instalments in this series...In its bringing together the most approachable and inscrutable aspects of the composer's creativity, indeed, this is as thought-provoking a release as any in the Weinberg discography.

There is no way to prepare the new listener for Mieczyslaw Weinberg’s cello concerto...the concerto’s opening throws aside all pretensions, all formal dress, and simply exposes its heart...It deserves to be a mainstay of every cellist’s repertoire

Very, very occasionally you come across unknown pieces of music which have an instant, overwhelming physical impact...Weinberg’s 1948 Cello Concerto is one of those works, an understated jewel...The opening Adagio of the concerto is a stunner, an effortless, lyrical outpouring which has haunted me for weeks...Beautiful sound and excellent performances