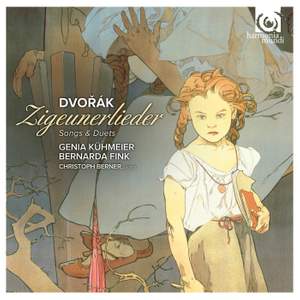 Fink has clearly thought through the expressive language of these lovely songs, and Christoph Berner is a near-ideal accompanist. The Moravian Duets...are, over all, the most enjoyable part of... — BBC Music Magazine, November 2012, 4 out of 5 stars More…

I. My song of love

II. Hark how my triangle

III. And the forest is silent all around

IV. Songs My Mother Taught Me

V. The strings are tuned

VII. Give a hawk a pure gold cage

I. I will escape you

III. If my scythe were whetted

IV. Friends we were when we met

V. How small the field of Slavíkov is

VI. The Dove on the Maple Tree

I. Clouds and darkness are round about him

II. Thou art my defence and shield

IV. The Lord is my shepherd

V. Lord! Lord! I will sing a new song

VII. By the waters of Babylon

VIII. Turn thee unto me, and have mercy upon me

IX. I will lift up mine eyes unto the hills

X. O sing unto the Lord a new song

In 2004 Bernarda Fink released a recording of Dvorák songs that was awarded critical plaudits internationally. Now, eight years later, she returns to the composer, in the company of young soprano Genia Kühmeier, to sing 13 of the Moravian Duets which brought the young musician fame far beyond his homeland. The other two cycles, for solo voice, round out the portrait of a Dvorák still attached to musical traditions, whether sacred (Biblical Songs) or secular (Gypsy Melodies).

Fink has clearly thought through the expressive language of these lovely songs, and Christoph Berner is a near-ideal accompanist. The Moravian Duets...are, over all, the most enjoyable part of this issue: expressive, resonant and brimming over with good humour...The Biblical Songs are delivered with care and sincerity...these well recorded performances have much to recommend them.

Encouraged by Christoph Berner's zesty, colourful accompaniments, Genia Kuhmeier and Bernarda Fink give thoroughly delightful performances, combining eager characterisation...with a crucial sense of spontaneous enjoyment...Kuhmeier catches both the flaring intensity and the nostalgic tenderness of the Gypsy Songs...[Fink] reveals a more impassioned temperament than I had previously suspected.

What a lovely performance [Fink] gives. Almost all the songs are slow and with a less sensitive interpreter than Fink they can seem dull at times, but not here: calm, soothing, reverential, delicate but not dull...Delights a-plenty come in Moravian Duets, whatever the mood, showing how well two female voices can blend.

Fink and Kühmeier sing [the Moravian duets] with great verve, avoiding the pitfalls of sentimentality and folksy cuteness that can so easily creep into this music. ...Kühmeier gives a big, passionate performance of the Op 55 Gypsy Songs, while Fink tackles the austere Biblical Songs, written while Dvořák was homesick in the US. They suit her dark tone admirably