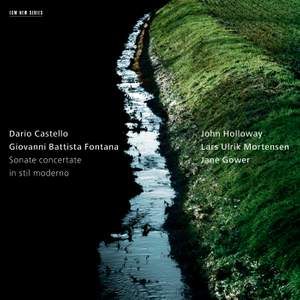 just hearing the music itself, regardless of this infectious, quick-witted performance, is a revelation. Although the Castello feels like the most important work on this disc, the sonatas of... — Gramophone Magazine, July 2012 More…

Leading baroque violinist John Holloway turns to Dario Castello and Giovanni Battista Fontana, two Italian composers from the turn of the 17th century, for his latest journey into undiscovered territory on the early music map, taking along with him two distinguished musicians, Danish harpsichordist Lars Ulrik Mortensen and Jane Gower, a leading player of the dulcian.

Musical scholarship doesn’t have much to tell of either composer. As little is known about Castello, who was leading an ensemble at St. Mark’s around 1629, as about the exact birth and death dates of Fontana, who came from Brescia and probably perished during the 1630 outbreak of plague in Padua. Yet there are a number of surviving works by both men that reveal them to have been remarkable composers for the violin.

Two books by Castello of sonate concertate in one to four parts, in stil moderno with continuo, were printed during the composer’s lifetime. Holloway has selected a number of sonatas from this collection to couple with similar works by Fontana, some originally for violin as well as some conceived for other string or wind instruments. Along with solo violin sonatas, he has chosen six of these sonatas for violin and basso continuo that can be regarded as precursors of the later trio sonata or even as early examples of that genre.

“The joys of performing this music are many and various: its mood changes and improvisatory character demand – and reward – a willingness to take risks, to live, dangerously, in the moment” says Holloway. John Holloway has toured extensively as soloist and with the Academy of Ancient Music, the Taverner Consort, Freiberger Barockorchester and other ensembles. For many years he led both the internationally-renowned London Classical Players and the Taverner Players.

In 1999 he was appointed Professor of Violin and Chamber Music at the Hochschule für Musik in Dresden, Germany. His previous, much acclaimed, recordings for ECM include discs of Schmelzer, Leclair, Veracini, two volumes of sonatas by Biber, and Bach’s Sonatas and Partitas for solo violin.

just hearing the music itself, regardless of this infectious, quick-witted performance, is a revelation. Although the Castello feels like the most important work on this disc, the sonatas of Giovanni Battista Fontana with which it is juxtaposed are just plain beautiful, and played so. And that the trio sonatas are among the earliest examples of that genre.

They typify the early-baroque tendency to explore contrasts, of instrumental colour as much as of any other parameter, and are scored for violin and dulcian. The latter instrument is assigned an independent, often highly energetic line, and Gower plays it with beguiling brilliance, graceful phrasing and artful ease.

Their serious eloquence is beautifully captured in John Holloway's incisive playing, but what is equally remarkable here is the virtuosity of the lower parts for the dulcian, an early bassoon. Jane Gower commands their flights of fancy with such skill that the violin is sometimes overwhelmed, but in Castello's Sonata Decima they achieve a perfect match. Lars Ulrik Mortensen's gentle harpsichord complements discreetly.