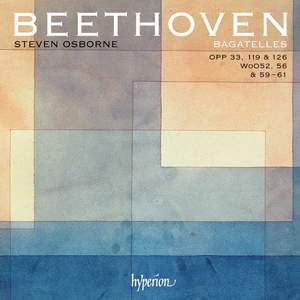 His playing is immaculately polished, but here he misses something of the arresting brusqueness, heartfelt lyricism, madcap zaniness, and tender melancholy...Osborne's most expressive playing... — BBC Music Magazine, August 2012, 3 out of 5 stars More…

No 3 in F major. Allegretto

No 4 in A major. Andante

No 7 in A flat major. Presto

No 01 in G minor. Allegretto

No 04 in A major. Andante cantabile

No 06 in G major. Andante – Allegretto

No 08 in C major. Moderato cantabile

No 09 in A minor. Vivace moderato

No 10 in A major. Allegramente

No 11 in B flat major. Andante ma non troppo

No 2 in G minor. Allegro

No 3 in E flat major. Andante

No 5 in G major. Quasi allegretto

Following his highly acclaimed Beethoven ‘Moonlight’, ‘Pathétique’ and ‘Waldstein’ Sonatas release, Hyperion’s Gramophone-award-winning artist Steven Osborne turns his talents to Beethoven’s complete Bagatelles. Though the composer himself referred to these thirty short piano works, which he penned throughout his life, as ‘trifles’, these are nonetheless trifles from the mind of a genius. In this polished album, Osborne lends his remarkable artistry to everything from the Six Bagatelles of Op 126, which at times occupy the same rarefied spiritual world as the late quartets and were the very last works Beethoven ever wrote for the piano, to the composer’s most famous stand-alone piano piece, the mysterious little A minor Bagatelle known to all the world as ‘Für Elise’.

His playing is immaculately polished, but here he misses something of the arresting brusqueness, heartfelt lyricism, madcap zaniness, and tender melancholy...Osborne's most expressive playing comes in the reflective moments of the Op. 126 Bagatelles.

It's a part of [Osborne's] personal excursion to seek the individual potency of each Bagatelle...Osborne has delved deep to extract so much from cameos that pack emotional enormity within small spaces.

The air of faux naivete Osborne brings to these trifles is particualrly persuasive, with understatement providing the perfect setting and foil for Beethoven's droll humour...Whatever preconceptions you may bring to these pieces, the crystal clarity of Osborne's exquisitely polished pianism is an unalloyed joy to the ear...Osborne's new recording will take its place without apology in any company.

Despite playing on a modern grand, Osborne’s attack, tone and phrasing suggest an awareness of period performance practice. Climaxes are powerfully telling, yet always remain within “classical” parameters...[Osborne is] captivating, with a gentle touch that produces an astonishing inwardness.

vigorously and sparklingly played by Steven Osborne, who must bring his pianistic intelligence to bear on elementary and virtuosic performance levels alike.

[Beethoven's] Leipzig publisher complained that they were such insignificant trifles no one would believe they were by Beethoven: not only slight but on the whole easy too. The joy of having a player of Steven Osborne's spare, rhythmically incisive brilliance shows the idiocy of the publisher's words.

the range is enormous...Osborne encompasses this transition in masterly fashion. This disc follows on from his one of Beethoven sonatas, and it ignites a similar joy in the way that he conveys ideas so lucidly and with such subtle shades of tone, distilling the essence of each miniature with potency and freshness.