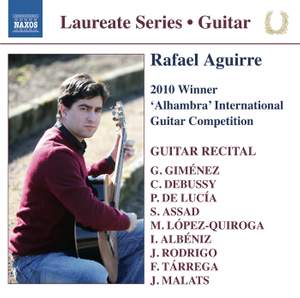 Rafael Aguirre is acknowledged as one of today’s most celebrated virtuoso guitarists, having won first prize at 13 of the world’s most prestigious international competitions: a record-breaking achievement for a Spanish musician. Following on from his previous, acclaimed recording (8572064), this fullblooded recital is of music by Spanish composers or those influenced by Iberia, from the pure flamenco of Paco de Lucía’s Guajiras to Debussy’s impressionistic Soirée dans Grenade, and from Albéniz’s Triana, named after the gypsy quarter in Seville, to the virtuoso fireworks of Tárrega’s Gran Jota.