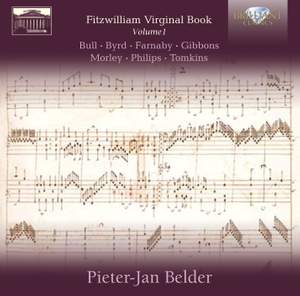 Mundy, J: Goe from my Window (from The Fitzwilliam Virginal Book)

Goe from my Window

Farnaby, G: The Olde Spagnoletta (from The Fitzwilliam Virginal Book)

Peerson: The Fall of the Leafe

The Fall of the Leafe

The first volume of the Complete Edition of the Fitzwilliam Virginal Book.

This remarkable collection of works for the virginal, or small harpsichord, is found in the Fitzwilliam Museum in Cambridge. It is the largest collection of Elizabethan and Jacobean keyboard music, all handwritten and totalling nearly 300 compositions, and all of which predate the first keyboard music published in England by about 50 years. The identity of the copyist of these works is uncertain, although a fascinating riddle.

The manuscript is a role call of the leading composers of the era - John Bull, Giles Farnaby, William Byrd, Peter Philips, Orlando Gibbons, Thomas Tomkins and a number of unknown composers all feature. The copyist was, therefore, immersed in the world of keyboard music, with connections to the great composers of the day. Research seems to point to one Francis Tregian from Cornwall, who may have copied the music whilst in Fleet prison from 1608 until his death in 1619. He certainly had time on his hands, but how he obtained the materials and original music is far from clear. His connection to Cornwall is important - William Cornyshe (whose surname probably indicated his birthplace) was a significant composer during the reign of Henry VII and Henry VIII, while Farnaby and Tomkins also came from Cornwall.

Tregian’s remarkable work – which extends to four volumes and 2000 pieces – ensured the survival of music by many of the most important composers of this era.

This CD, the first in a series, includes a number of rare but intriguing keyboard works, performed by harpsichordist Pieter-Jan Belder.