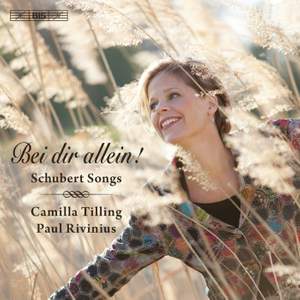 The al fresco exuberance of 'Bei dir allein' gets this recital off to a delectable start: Camilla Tilling's vernal tone is fresh and smiling, her phrasing both shapely and feurig, as Schubert... — Gramophone Magazine, July 2012 More…

The disc includes some of Schubert's best-known songs, such as the carefree An Silvia, the serene Litanei, and the first Suleika song.

The programme features great changes in emotion: from the portrayals of the joy and despair of young love in Bei dir allein! and Lied des Florio, to the Gothic drama of Der Zwerg and the despondency of Totengräbers Heimweh.

As well as having a highly successful opera career, Camilla Tilling has made a name for herself in concert and in recital. Her previous recording for BIS – the Strauss recital Rote Rosen (BISSACD1709) – was met with great critical acclaim.

The al fresco exuberance of 'Bei dir allein' gets this recital off to a delectable start: Camilla Tilling's vernal tone is fresh and smiling, her phrasing both shapely and feurig, as Schubert demands, her response to mood and harmony vivid...Tilling's tonal radiance and free-soaring top notes are priceless assets...a Schubert recital of rare pedigree.

Tilling is a Swedish singer whose enchanting soprano voice and acute musical intelligence are both admirably deployed in this well-chosen selection...The opening song of the recital is the lively, exhilarating 'Bei dir allein!'...Tilling negotiates it without strain and sings it with delightful spontaneity...This is a lovely disc, a treat for all lovers of Schubert's songs.

Above all, Tilling is versatile and protean...Her soprano sounds peachier than ever, her diction is clear and her musical instincts are immaculate. This lovely singing is underpinned by Paul Rivinius’s outstanding playing of the equally important piano parts. A must for Schubertians.