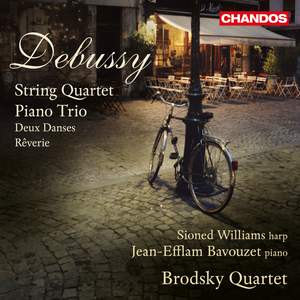 This is a marvellously inventive collection...There has been a tendency towards more red-blooded performances of Debussy's String Quartet in recent years...The Brodsky Quartet partially fit that... — BBC Music Magazine, June 2012, More…

The Brodsky Quartet celebrates its fortieth anniversary this year. Formed in 1972, the Quartet quickly emerged at the forefront of the international chamber music scene. It has performed more than 2000 concerts and made more than fifty highly acclaimed recordings. Now exclusive Chandos artists, the Brodsky players are releasing their second disc on Chandos with guest soloists Jean-Efflam Bavouzet and the harpist Sioned Williams.

The Trio for piano, violin, and cello is an early work, written before Debussy established his own very distinctive musical language heard in pieces such as La Mer. Another early piece, Rêverie, for piano, was written by the young, struggling composer at a time when he was trying to make a living in Paris. The easiest market to break into for a composer was the salon, where songs and not-too-taxing piano music were in demand. Rêverie was one of several charming and tuneful works that Debussy wrote for this scene.

In a somewhat different league, the String Quartet is considered a defining work in the history of chamber music. Sensual and impressionistic, it employs a cyclic structure that constituted a split from the rules of classical form and pointed the way forward. In the words of Pierre Boulez, Debussy freed chamber music from ‘rigid structure, frozen rhetoric, and rigid aesthetics’.

The Deux Danses, made up of the ‘Danse sacrée’ and ‘Danse profane’, complete the disc. At the end of the nineteenth century, the Parisian instrument makers Pleyel invented a ‘chromatic harp’ which dispensed with pedals and achieved the full chromatic compass from two rows of strings that slanted across one another. Debussy was approached to write two pieces intended for a final examination of the Pleyel model. ‘Danse sacrée’ makes use of Church modes, while ‘Danse profane’ is a kind of sarabande. The ‘competition’ aspect of the pieces is highlighted by the fact that, after the opening introduction, the harpist has no more than six bars’ rest. As it happened, the Pleyel model never caught on, and the works are now always performed on a pedal harp.

This is a marvellously inventive collection...There has been a tendency towards more red-blooded performances of Debussy's String Quartet in recent years...The Brodsky Quartet partially fit that mould...Their playing is tempered, both in the Quartet and the Reverie, by a quivering texture in more hushed moments

The Quartet tops the running order in a confident, vital, lyrical reading. Beautifully nuanced, there's acerbic edge, gentle Gallic playfulness, aching romance and every emotional and tonal shade in-between...Cassidy's scoring [of Reverie] is so similar to that of the quartet that the work has taken on a new identity...its new gravitas makes it a fitting bookend to the programme, a partner to the Quartet, and an unexpected delight.

Altogether a satisfying and unique Debussy coupling, superbly played...What is so striking about the playing of the Brodsky Quartet throughout is their brimming love for the music, with some ravishing shading down to the most hushed pianissimos. All this is caught in wonderfully rich and transparent sound, a credit to the Chandos engineers.

In the Piano Trio Bavouzet enjoys the spotlight with some memorable pearliness of tone, and here violinist Daniel Rowland is joined by cellist Jacqueline Thomas in a performance notable for its warmth and luminosity...the natural-sounding acoustic does much to enhance the listener's experience.

The Brodsky Quartet makes its intentions clear from the first bars of Debussy’s Opus 10 String Quartet: this is by no means going to be an atmospheric echo of impressionism, but an interpretation in which every single stress and emotive extreme is going to be exploited and laid bare. The Brodsky players do plenty in terms of colour

For those of us who recall the Brodskys as “Cool Britannia” clotheshorses, their 40th anniversary this year — well, for two of the line-up — comes as a shock. Less surprising is their compelling account, forthright and dramatic, rather than hazily impressionistic, of the [Debussy]