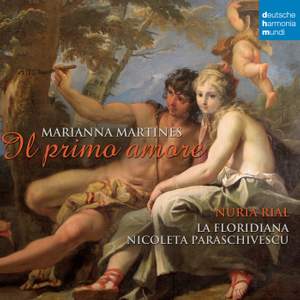 Paraschivescu and La Floridiana draw us into Martines's music through exquisite detailing...The archness of Martines's phrasing, the delicacy of her dancing pulses, and the sly timing of her... — BBC Music Magazine, October 2012, 4 out of 5 stars More…

Marianna Martines: Sonata per Cembalo in A Major

Marianna Martines was one of the most accomplished and highly honoured female musicians of the eighteenth century. She studied with the young Joseph Haydn and was known in Vienna to be a gifted singer and keyboard player, who performed duets with Mozart himself. Despite the fact that many of her compositions appeared in print during her own lifetime many of her works are still missing, among them a total of probably 28 sonatas and eight concertos for harpsichord. The album includes four world premiere recordings, and is released to commemorate the 200th anniversary of Marianna Martines who died on March 11th 1812. The 28 page booklet is complete with elaborate liner notes and full libretti in German, English and French

Spanish Catalan soprano Nuria Rial is famous for her shining, cristal clear and beautiful voice and is one of the most fitting voices for baroque arias. She was described as "a silvery sounding voice, as clear as a bell." (Opernglas)

Nicoleta Paraschivescu is a dedicated harpsichord player and musical director of "La Floridiana". Concerts have taken her across Europe and to major festivals such as the Davos Festival, Bach Dies Cremona, the Rheinland-Pfalz Organ Festival, Culturescapes Basel and the L'Aquila Festival in Rome. La Floridiana is a Swiss based, period instrument ensemble that performs unknown works in the main that have been unearthed in libraries and private collections with the aim of expanding the current repertoire of the Early Music scene.

Paraschivescu and La Floridiana draw us into Martines's music through exquisite detailing...The archness of Martines's phrasing, the delicacy of her dancing pulses, and the sly timing of her modal shifts bloom gorgeously. Soprano Nuria Rial is equally appealing...all the music richly deserves to be heard.

Nicoleta Paraschivescu and her little band of woodwind, horns and single strings are powerful advocates and Nuria Rial is splendidly passionate in the scena. Buy the disc: you won't regret it.

a talent firmly rooted in the style of her contemporaries Mozart and Haydn but imbued with a refreshingly feminine vivacity. The cantata "Il primo amore" and aria "Berenice, ah che fai?" are brought to life by the gloriously sweet-toned soprano Nuria Rial, while the formidable Nicoleta Paraschivescu directs the lithe players of La Floridiana