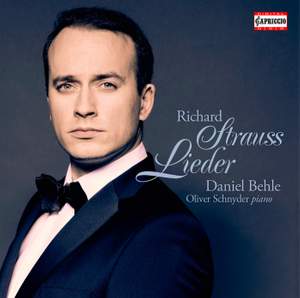 With many acclaimed and award-winning recordings under his belt and continuous opera and concert engagements, Daniel Behle’s career is definitely rocketing. His previous recordings have been well received with MusicWeb awarding his Die Schöne Müllerin CD on Capriccio (C5044) Recording of the Month. The critic said “Daniel Behle has presented himself as a significant interpreter of Lieder”, so Capriccio is delighted to present a selection of songs by Richard Strauss.

Daniel Behle said of his latest recording: “I am a lyrical Tenor and as such, one just gets introduced to the Schöne Müllerin, later to the Dichterliebe and eventually to the Winterreise (although I allow myself more time for that one) in the course of one's studies. At the moment I am quite happy to have opened another page besides the lightly lyrical: to dip into the late romantic era and to discover the outgoing, active and hands-on aspects of the period.”

Soft, inward rapture for 'Ständchen' is Behle's excellent starting point...An easy confidentiality never allows over-inflection here...Whether or not the studio tells the truth, Behle is also able to bring a heroic sheen to the refulgent climaxes...which makes comparison with Jonas Kaufmann not inappropriate; but in any case this is a tenor with a candid, easy approach all his own.

This thrilling Strauss album makes me want to hear this young German tenor in everything he sings. His light lyric timbre is reminiscent, in its ascents to the stratosphere, of earlier German-speaking tenors (Tauber and Dermota spring to mind). He crowns Cäcilie with a stunning top B...breathtaking work from both singer and pianist.