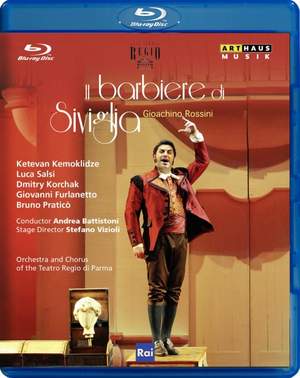 In Parma, where audiences are considered the most discerning in all Italy, the benchmark for vocal artists is set traditionally high. Operagoers here are intimately familiar with the works of their favourites, from Rossini to Puccini, and know every tricky corner by heart. God forbid any singer who fails to accomplish the task without due seemliness… Unsurprisingly, then, this performance attempts no directorial experiments. The main setting for this realistically inspired production – both indoors and out – is Rosina’s house, which is converted as required into its constituent parts. One happily turns a blind eye to a (historically authentically dressed) protagonist occasionally being seconded to move a piece of stage scenery. Stage presence, vocal perfection and above all the audibly and visibly gleeful participation of all performers in the action are a more than adequate payoff for the intellectual flights of fancy of other interpretations.

Our rewards are found on the one hand in the precise and sure-footed direction of Stefano Vizioli. All performers know exactly the role they are required to play and how best to carry it off. On the other hand, the singers on stage and instrumentalists in the pit seem to enter a new dimension as soon as the Rossini machine gets up to speed. The spirited orchestra plays under the magical baton of Andrea Battistoni, born in Verona in 1987 and appointed principal guest conductor at Parma’s Teatro Regio in January 2011.