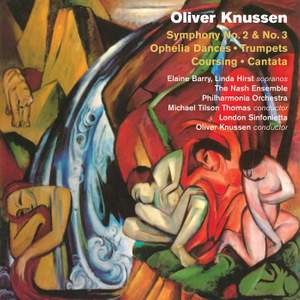 Here is the essence of him: his precocious song-cycle symphony (No 2) and arresting Symphony No 3 (performed by the Philharmonia)...and that locus classicus of ensemble virtuosity, the five-minute... — Sunday Times, 12th February 2012 More…

This release on the NMC mid-price re-issue label Ancora was previously issued on Unicorn-Kanchana Records.

Knussen's Ophelia Dances will be performed by BCMG at his 60th birthday concert held at the CBSO Centre (Birmingham, UK)

A new release on NMC of works by Knussen is released this autumn, featuring BCMG, Ryan Wigglesworth and soprano Claire Booth.

Knussen started composing at the age of 6 and aged 15 he stepped in to conduct his symphony's première at the Royal Festival Hall, London in 1968 after István Kertész fell ill. After that debut, Daniel Barenboim asked him to conduct the work's first two movements in New York a week later.

This is a substantial sampler of Oliver Knussen's output in the 1970s. The two major works are the luminous Second Symphony, which takes the form of a 17-minute song cycle to texts of Georg Trakl and Sylvia Plath and Symphony No. 3, a symphonic poem about Shakespeare's Ophelia.

Here is the essence of him: his precocious song-cycle symphony (No 2) and arresting Symphony No 3 (performed by the Philharmonia)...and that locus classicus of ensemble virtuosity, the five-minute Coursing, with its long-sustained, leaping, complexly inflected unison line plausibly evoking Niagara Falls.

Knussen’s musical language is complex and post-serial, yet he has the knack of conjuring clarity, wit, emotion and memorability out of an idiom that produced so much forgettable cerebral sludge.