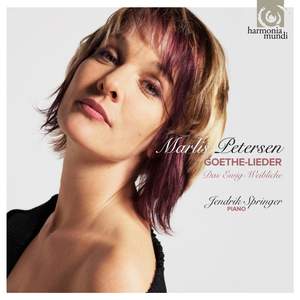 the sheer range of Petersen's soprano and her interests enables her to compel and convince as much in 1821 Schubert as in German composer Manfred Trojahn's settings from 2008...Most fascinating... — BBC Music Magazine, May 2012, 5 out of 5 stars More…

For her first solo CD, Marlis Petersen and her partner Jendrik Springer have devised this programme of 19 lieder, from nearly two centuries of music, centreing on the concept of the 'Eternal Feminine'.

"For this CD we made a selection of songs sung by several female characters from Goethe’s dramas (Stella, Klärchen, Gretchen, Mignon, Philine, Suleika and Helena). Among them are a number of poems which have been set to music countless times in the past two centuries, but are today often known only in a standard setting: if one speaks of 'Gretchen am Spinnrade' or Klärchen’s 'Freudvoll and leidvoll' (to take just two examples), then each of us thinks immediately of the compositions by Franz Schubert and Ludwig van Beethoven respectively. These poems too are on our CD, but set by Richard Wagner and Franz Liszt! By choosing composers who are not usually associated with the lied genre (Ernst Krenek, Charles Ives) or in certain cases probably completely unknown to some listeners (Nikolay Medtner, the pianist Wilhelm Kempff), we wanted to encourage a fresh approach to the poems, one not cluttered by listening traditions. However, to make the selection of songs as varied and balanced as possible, we have also included a few well-known settings like Schubert’s 'Was bedeutet die Bewegung' or Robert Schumann’s 'So laßt mich scheinen'. Furthermore, Manfred Trojahn has contributed a new setting of words portraying Helen of Troy, thus bringing our survey right up to date. Between the individual groups and at the end we have placed a setting of Goethe’s second ‘Wanderer’s Night Song’, 'Über allen Gipfeln ist Ruh'. This is intended to serve as a restingpoint, an emotional ‘reset’; at the same time, it gave us the possibility of presenting a single poem in the interpretation of six different composers: the naive idyll of Hans Sommer and the threatening, doom-laden atmosphere of Nikolay Medtner’s setting are worlds away from each other. It was a thrill and a delight for us to explore this virtually inexhaustible musical treasure-trove in order to come up with an interesting selection of songs that amply repay discovery. We hope you will be as fascinated by this rich diversity as we were!" Marlis Petersen/Jendrik Springer

the sheer range of Petersen's soprano and her interests enables her to compel and convince as much in 1821 Schubert as in German composer Manfred Trojahn's settings from 2008...Most fascinating and seductive of all are the rare settings of Goethe's Uber allen Gipfeln ist Ruh

There are real treats here and on her best form Marlis Petersen is the kind of silvery-toned lyric soprano for whom some of these Goethe settings hold no fear. She is a natural Mignon in Alphonse Diepenbrock's Kennst du das Land and an appealing Helen of Troy in Manfred Trojahn's Bewundert viel und viel gescholten...it's a compelling piece, packed with drama as Helen contemplates her place in world history