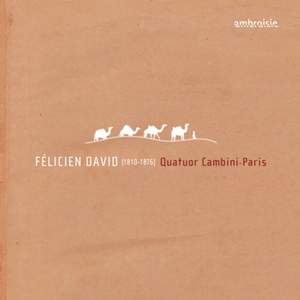 David, Félicien: String Quartet No. 1 in A major

Founded in 2007 and based in Paris, Quatuor Cambini are known for rediscovering rare works from the classical and romantic repertoire as well as performance on period instruments. Its leader Julien Chauvin is the co-founder and solo violin of Le Cercle de l’Harmonie and members of the quartet have played in many of the most renowned orchestral groups in Europe including Le Cercle de l’Harmonie, Ensemble Baroque de Limoges, Les Talens Lyriques, and L’Orchestre des Champs-Elysées. Following a first recording dedicated to the music of Hyacinthe Jadin on the Timpani label, the quartet now records exclusively for Naïve/Ambroisie.

The 19th century French composer Félicien David is remembered almost exclusively for his operas-comiques “La Perle du Brésil” and “Le Désert” as well as his oratiorio “Moïse au Sinaï”. However, whereas many of his contemporaries and compatriots such as Gounod, Bizet and Massenet concentrated on writing for the opera house David maintained a lifelong interest in instrumental music. His output includes twenty-four short string quintets, four symphonies, two nonets for brass, four string quartets and three piano trios.

While the influence in his songs and operas was largely Eastern (he spent a considerable amount of time living in Egypt), his chamber music has its roots in the Germanic tradition.

Attractiveness is perhaps the keyword in this music. No complaints there, for David writes with grace and drama, with a fine ear for sonority and instrumental balance...Playing on period instruments, the Quatuor Cambini-Paris combine verve and sensitivity in underlining the essential elements of enjoyment that the music conveys.

Félicien David is a more or less forgotten name today but this fine period-instrument recording by the Cambini-Paris Quartet makes a good case for further exploration of his corpus of works.

They are both substantial and easy on the ear, if sometimes a little obvious. In these respects, David is something like a French Mendelssohn, but he knows how to make the string quartet’s sonorities work.