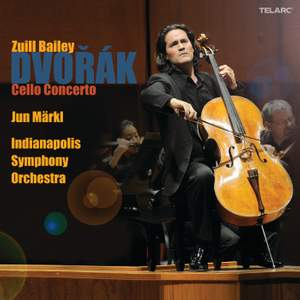 this wonderfully spontaneous new version by Zuill Bailey and Jun Markl tends to sweep the board...As soon as Bailey beings the introduction the ear is aware that this is a live performance, for... — Gramophone Magazine, May 2012 More…

Zuill Bailey’s recording of J.S. Bach's Suites for Solo Cello (TEL3197802) was released in 2010 and went straight to the top of the “Billboard” classical chart.

Last year he brought out a critically acclaimed CD devoted to music for cello and piano by Brahms (TEL3266402). This, his latest release, features one of the most enduring works in the romantic repertoire, Antonin Dvorak’s Cello Concerto. The orchestra on the disc, which also includes two of the composer’s Symphonic Poems “The Water Goblin” and “In Nature’s Realm”, is the Indianapolis Symphony and the conductor is Jun Märkl.

Zuill Bailey made his Telarc debut early in early 2009 with a CD called “Russian Masterpieces for Cello”, a disc which featured music by Tchaikovsky and Shostakovich.

Towards the end of last year he joined forces with pianist Simone Dinnerstein in a critically acclaimed recording of Beethoven’s complete works for piano and cello. Since then his recording of J S Bach’s cello suites has been a massive success particularly in the USA where it spent four weeks in a row at No. 1 on the Billboard classical chart, and even made the top 30 in the New Artists chart.

Antonin Dvorak’s Cello Concerto in B minor, Op. 104, B. 191 was written in 1894–1895 for his friend, the cellist Hanuš Wihan. Dvořák wrote the concerto while in New York during his third term as the Director of the National Conservatory.

this wonderfully spontaneous new version by Zuill Bailey and Jun Markl tends to sweep the board...As soon as Bailey beings the introduction the ear is aware that this is a live performance, for there is both electricity and warmth in the air...All in all this is an unforgettable performance

A great deal is individual, as well as collegiate, in this performance, the musicains serving the score with depth and perception and producing much that is captivating and stirring. It's an account that marks Bailey out as a striking cellist and musician...Markl and his musicians conjure a vernal and exuberant performance that leaves one in no doubt as to the music's quality.