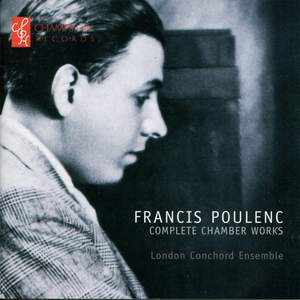 This is an excellent, spirited two-CD set...A facotr that comes across clearly here is that Poulenc had a more or less infallible ear for tapping into the timbre and personality of different... — Gramophone Magazine, June 2012 More…

This new disc from the acclaimed London Concord Ensemble presents Francis Poulenc's complete chamber music on 2 CDs. This flexible ensemble of internationally recognised young soloists and chamber musicians has excelled in bringing works for unusual instrument combinations to the fore, including the chamber music of Ludwig Thuille on a recent Champs Hill release.

"The ensemble clicks perfectly, the playing seemingly effortless and a regard for precision never stifling the musicians' natural feeling for life and breath." BBC MUSIC MAGAZINE

The music traverses his career, from early works such as the Sonata for Two Clarinets of 1918, to the late Sonatas for Oboe and Clarinet. It reflects his compositional personality, from the mischievous wit of his early neo-classical phase, to the profundity of his last composition. His music for wind instruments is beloved of its performers; immensely idiomatic and exploiting the full strengths of each instrument.

"Nothing is further from human breath than the bowstroke." he wrote. But it's important not to overlook the importance of his other chamber music, for instance the Sonatas for Violin and Cello. The Sextet and Trio for Piano and winds are arguably the greatest written for their combination of instruments. The Trio was the first of his chamber pieces to use his own instrument, the piano, and was eventually completed in 1926 after some advice from Stravinsky (whose astringent woodwind writing he had emulated in his early works).

His Sextet required even more revisions, eventually reaching its current form in 1939. It is one of Poulenc's earliest works to show the influence of Prokofiev. After some false starts, he completed the Sonata for Violin and piano in 1942 and it was premiered in 1943 at the Salle Gaveau in Paris although some may argue that his Cello Sonata, completed in 1948, is altogether more successful. His moving memorial to the great English horn player Denis Brain is the Elégie of 1957 and includes a bleak lyrical central section which anticipates Poulenc's final choral work, Sept répos des ténèbres. The two final sonatas, for Clarinet (1962) and for Oboe (1962-3), were also written in memory of departed friends, to Honneger and to Prokofiev respectively.

This is an excellent, spirited two-CD set...A facotr that comes across clearly here is that Poulenc had a more or less infallible ear for tapping into the timbre and personality of different instruments...The London Conchord Ensemble mainfestly relish what Poulenc has to offer, playing with panache, wit and discreet sensitivity in performance that are a constant joy.

This is an extremely enjoyable set of Poulenc's chamber music. It's certailny one of the best around...[recordings] are unobtrusively excellent, a lovely natural sound that gives this set an advantage over the two rival versions...In short, if you're looking for a fine set of Poulenc's chamber works in really engaging performances in very fine sound, this Champs Hill set is as good as any.

No longueurs on these excellent discs: Poulenc’s invention is always sprightly, and the performers are vivified by it; though an outstanding item is the Elégie for Horn and Piano, in memory of Dennis Brain

His work is no mere froth; there's a smoky, autumnal sadness to his harmonic writing, a lingering regret beneath the joie de vivre, particularly in the intimacy of his chamber music. The London Conchord Ensemble understand this completely, working their magic in the bittersweet sonatas...and romping through ensemble works large and small