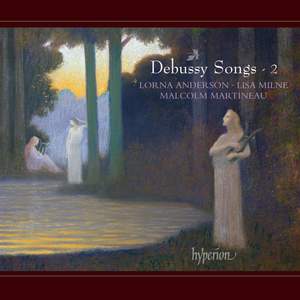 David selects some of the best recordings of the French Impressionist composer, Claude Debussy.

Two of Britain’s leading exponents of French song, the acclaimed sopranos Lorna Anderson and Lisa Milne, join Malcolm Martineau for the second volume of Hyperion’s overview of Debussy’s haunting, mercurial songs. The French composer’s output in this genre extended throughout his life and he was always inspired by poetry—from his first adolescent attempts to set Paul Verlaine’s Fêtes galantes (which he later revised) to the Trois Poèmes de Mallarmé, written five years before his death. All inhabit a universe of shifting colours and impressions, from the sensual, perfumed ‘flutes and flesh’ of the Chansons de Bilitis to the Proses lyriques, which foreshadow the dreamlike atmosphere of Pelléas et Mélisande.

Anderson and Milnes contrasting in approach. Anderson effortlessly glides through Debussy's limpid, lengthy phrases, while Milne's shivering sense of wonder is Melisande-like in its pent-up excitement. Milne's breathy approach to the sublime Ariettes oubliees has plenty of frisson about it

The first thing to say that the performances by sopranos Lorna Anderson and Lisa Milne are consistently beautiful, alert to the implications of Debussy's word-setting, whether ecstatic or subdued...Martineau matches them in the subtlety, characterisation and refined textures of his piano-playing