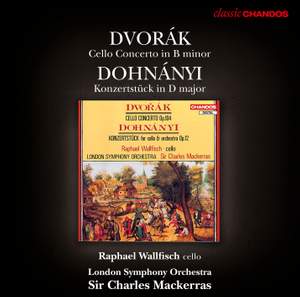 Expectations run high for any disc of Charles Mackerras conducting Dvořák, and this one doesn't disappoint. He is at the top of his game here, and with an orchestra and soloist to match...Wallfisch's... — MusicWeb International, May 2012 More…

Dohnányi: Konzertstück in D major for Cello and Orchestra Op. 12

This month, on the Chandos Classics label, we are re-releasing our recording of Dvořák’s Cello Concerto in B minor and the Konzertstück for Cello and Orchestra by Dohnányi (CHAN8662), performed by the London Symphony Orchestra and Sir Charles Mackerras, with Raphael Wallfisch the featured soloist.

The Cello Concerto in B minor by Dvořák has become one of his most popular works, and perhaps the most popular concerto ever written for the instrument. He was asked to write this piece by a friend of Wagner, the cellist Hanuš Wihan. Initially reluctant, Dvořák stated that the cello was indeed a fine orchestral instrument but totally insufficient for a solo concerto. Fortunately, he changed his mind upon hearing Victor Herbert’s Second Cello Concerto performed in concert, in 1894. The resulting Cello Concerto is richly inventive, full of deep feeling, and perfectly fitted to the cello. Dvořák combined his experience as an orchestral player with an understanding of the cello’s distinct textural qualities to produce a grand and emotionally intense work, one of his finest achievements.

Ernst von Dohnányi was highly acclaimed as a pianist-composer, and widely regarded during his lifetime as a successor to Liszt. As a composer, however, he had more in common with Brahms than with Liszt, despite his Hungarian heritage, and his creative output was not limited to the piano. His Konzertstück in D major is in fact a full-scale cello concerto, in three interconnected parts. A lyrical rhapsody, it begins quietly, the cello emerging out of the orchestra and seeming to sing, until parting with a sense of regret at the end.

Expectations run high for any disc of Charles Mackerras conducting Dvořák, and this one doesn't disappoint. He is at the top of his game here, and with an orchestra and soloist to match...Wallfisch's reading of the Dvořák brings Rostropovich to mind. Like Rostropovich, he has a glowing, bronzed tone