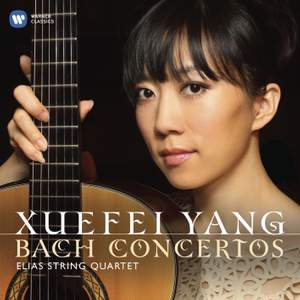 The composer's own lute transcriptions are her models and she finds ingenious means to overcome the problems introduced when recasting, say, a bowed violin line for the plucked guitar...While... — Gramophone Magazine, May 2012 More…

The Beijing-born guitarist Xuefei Yang has recorded her first album of baroque music, an all-Bach programme anchored by three concertos newly arranged for guitar and string quartet. Bach Concertos is an exciting, innovative album in which she has transcribed for the guitar some of Bach’s familiar violin concertos and other works, hoping to establish these new arrangements as noteworthy repertoire for the guitar and to expand the concerto repertoire for that instrument. Xuefei complements the concertante repertoire with solo guitar arrangements of the Violin Sonata No. 1 BWV 1001, the Prelude in C Major from the Well-Tempered Clavier BWV 846 and the Air on a G string from the Orchestral Suite in D major BWV 1068.

Xuefei, whose international career finds her on the prestigious stages of the Wigmore Hall, Southbank Centre, Royal Albert Hall, Concertgebouw (Amsterdam), Philharmonie (Berlin), Konzerthaus (Vienna) and Lincoln Center (New York), as well as to other major concert halls of Europe, North America and Asia, hopes that the new concerto arrangements will become established additions to the repertoire for her instrument. “In the baroque concerto repertoire,” she says, we only really have Vivaldi Concertos, which are very light in nature. These Bach concertos would be a substantial and significant addition to the guitar repertoire and may create new opportunities to bring the instrument to a wider musical audience.”

Explaining the background to her latest recording, Xuefei said, “In Bach’s time, the modern guitar had not yet been invented but a close relative, the lute, was a popular instrument. Bach wrote quite a few works for solo lute and they have become core repertoire for guitarists. When I was playing the wonderful solo violin works by Bach, I wondered whether his concertos would work on the guitar too. So I found the scores and, to my delight, I found that they did!” The three concertos at the heart of the recording are those for Violin in A minor BWV 1041 and E Major BWV 1042 and for Harpsichord in D minor BWV 1052. Xuefei performs them with the Elias String Quartet.

The composer's own lute transcriptions are her models and she finds ingenious means to overcome the problems introduced when recasting, say, a bowed violin line for the plucked guitar...While the challenges of adapting the concertos for guitar may not have been entirely surmounted, it would be worthwhile to hear Xuefei Yang in more solo music by Bach.