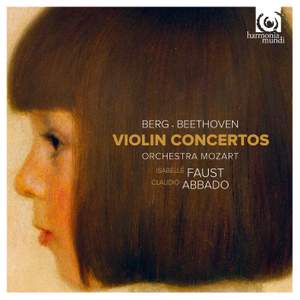 listening to these wonderful performances side by side is cathartic...The journey is vividly delineated from the outset of the Berg. With Abbado drawing sonorities from his first-rate orchestra,... — BBC Music Magazine, April 2012, 5 out of 5 stars More…

James sifts through the music of Alban Berg and offers his recommended recordings.

“My first collaboration with Claudio Abbado – with the Mahler Chamber Orchestra in 2008 – opened my eyes to a new way of understanding and experiencing the Beethoven Violin Concerto. He then expressed the wish to perform Alban Berg’s Violin Concerto, this time with the Orchestra Mozart. It seemed to him to be an obvious and natural continuation of the project to record these two works in further rehearsals and in concert and to produce a CD of them.

To place these two masterpieces in such close proximity was something quite new for me. The rehearsals in Bologna in 2010 involved working on the two pieces directly after each other: the result was an intense journey through sorrow and suffering in Alban Berg, by way of the cathartic Bach chorale, to Beethoven at his most radiant, apparently leaving all earthly cares far behind him, which utterly enchanted every one of us.

To make music with Claudio Abbado is an infinite joy, a genuine key to the magic of music. I would like to express here my sincerest thanks for his confidence and my boundless admiration for his artistry.” Isabelle Faust

listening to these wonderful performances side by side is cathartic...The journey is vividly delineated from the outset of the Berg. With Abbado drawing sonorities from his first-rate orchestra, Faust's limpid violin weaves subtly in and out of the music's dark and increasingly sorrowful fabric...The clouds immediately lift for the Beethoven...Faust's first entry is magical.

The Beethoven and Berg Violin Concertos aren't commonly paired on disc. However, in this case it seems like an inspired piece of programme planning, with an account of the Berg that plumbs its depths of melancholy, setting off a radiant, life-affirming performance of the Beethoven...Outstanding performances of both concertos, then; I'll want to return to them often.

Claudio Abbado is again on conducting duty for this stylish recording of the Violin Concerto, this time with Orchestra Mozart, and with Isabelle Faust providing her most beautiful, singing tone throughout.

It is the elements of tragedy and loss that Faust brings out most effectively in her recording [of the Berg]; aside from an extraordinary tone and perfect intonation, you can feel the intent and conviction behind every single note she plays...Abbado is a master of orchestral balance...you can hear all of the tiny details and colours in the score. The orchestral playing is top-notch throughout…

Faust has already demonstrated her empathy with music from Bach to Jolivet, but her collaboration with Abbado is inspired. Indeed, both find more beauty in this challenging score than most interpreters on disc: Abbado gets sumptuous Middle European textures from his Bologna-based orchestra, also wonderfully transparent and airy in the Beethoven concerto, treated like expanded chamber music....A glorious disc.

The unorthodox pairing...casts a curious spell in this thoughtful
performance...Faust's chaste, pale sound is offset against stained-glass woodwind and serene brass in the Berg, while bassoonist Guilhaume Santana is a glamorous dancing partner in the Beethoven.

Abbado’s hand-picked ensemble...produces a sound that is thoroughly apt to the particular world of each piece. Faust’s timbre and spectrum of emotion are similarly judged and communicated with arresting maturity and sensibility.
Likewise, she echoes the freshness and depth that Abbado stimulates in the orchestral playing of the Beethoven concerto, finding a mode of expression that is both lyrical and dynamic and contributing to a performance of real stature.

Each note appears to shine with an inner glow...Under [Faust's] fingers, her Stradivarius produces an astonishingly varied range of sound to meet the demands of Berg’s concerto...The luminous sound of Abbado’s orchestra, a continuing glory, infuses the [Beethoven] concerto with a real sense of joy; I don’t know of any other interpretation that wears such a smile so lightly. Faust is a wonder on this disc, but Abbado is even more so.

The [Berg’s] expressive range, which includes vehemence as well as delicacy, is fully probed here.

Faust’s performance is special. There’s something warm and consolatory in her playing. She doesn’t overdo the sentimentality, and there’s as much rapture as regret. None of which would be possible without Abbado’s perfectly judged orchestral support; the violent outbursts in the second movement are rightly brutal and the work’s closing minutes are exquisite…Buy this disc for the Berg – possibly the work’s finest recording yet.