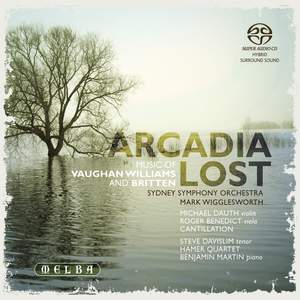 A concept album which may or may not suit the dedicated collector but is certainly worth trying...Performance-wise [Sinfonia da Requiem] is arguably the highlight of the disc...[On Wenlock Edge]... — Gramophone Magazine, June 2012 More…

I. On Wenlock Edge

II. From Far, From Eve and Morning

III. Is My Team Ploughing?

IV. Oh, When I was in Love with You

Arcadia Lost presents a feast for lovers of English music, featuring three Ralph Vaughan Williams’ masterpieces and one of Benjamin Britten’s in performances given by, mostly, Australian musicians. Renowned British conductor Mark Wigglesworth directs the Sydney Symphony Orchestra in three of the works, all recorded live at Sydney Opera House. The viola soloist in Flos Campi is Roger Benedict with the choir Cantillation, while Michael Dauth is the violinist in The Lark Ascending. Following an explosive performance of Britten’s Sinfonia da Requiem, the final work is Vaughan Williams’ song-cycle On Wenlock Edge for tenor, piano and string quartet, performed by Steve Davislim with Benjamin Martin and the Hamer Quartet.

The glistening solo violin of Michael Dauth, concert master of the Sydney Symphony Orchestra, captures the lark’s swirling flight in Vaughan Williams’ hugely popular The Lark Ascending. In the composer’s much less well-known Flos Campi (“flower of the field”), the SSO’s principal viola Roger Benedict gives glorious voice to this most passionate music for viola, chorus and orchestra. The Song of Solomon, one of the greatest love poems in all literature, is at the heart of this evocative piece.

In On Wenlock Edge tenor Steve Davislim brings the greatest tenderness and drama to the six settings of A.E. Houseman’s A Shropshire Lad poems, which in Michael Kennedy’s description in the booklet notes “tell of unrequited or unfaithful love and of soldiers marching away to die in foreign fields”. The brilliant young Hamer Quartet and pianist Benjamin Martin vividly underscore the tumultuous emotions of the work.

A concept album which may or may not suit the dedicated collector but is certainly worth trying...Performance-wise [Sinfonia da Requiem] is arguably the highlight of the disc...[On Wenlock Edge] is a stylish account of music too easily pigeonholed or taken for granted.

Wigglesworth's account of the Britten is a slow burner; he resists the temptation to turn it into a virtuoso showpiece for the fine Sydney orchestra from the start, but steadily ratchets up the intensity...In The Lark Ascending, too, there's something purposeful rather than just decorative about the scene-painting...[Davislim] avoids any hint of preciousness and takes the cycle for what it is