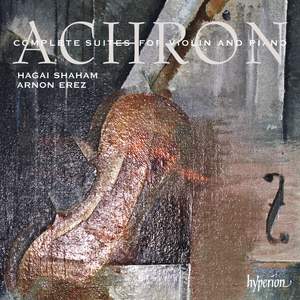 I. Jumping with tongue out: Allegro grazioso (after Op 57 No 2)

Admired by Schoenberg (who described him as ‘one of the most underestimated of modern composers’), Joseph Achron was a boundary defying violinist-composer of extraordinary gifts. He drew on his Jewish faith to profound effect, from the early influence of his cantor father to his enthusiastic championing of the Society for Jewish Folk Music (which did for Jewish music what Bartók did for Eastern European folk culture). It’s hardly surprising that much of Achron’s music is for violin—he was a consummate player himself and a prolific recitalist. But what’s striking is how varied and exploratory his output is, delighting in experimentation, as the wonderfully named Suite bizarre demonstrates, just as much as the direct emotionalism of his transcriptions of Hebraic melodies. Who better to present this music than two artists steeped in similar traditions to Achron: Hagai Shaham and Arnon Erez.

Arnon Erez's highly expressive, colourful playing brings out all their harmonic and textural subtleties. I'm sure this experienced team's sensitive collaboration would have delighted the composer. If you know Achron's music, you'll want to acquire this set; if he's new to you, I can assure you he's well worth investigating.