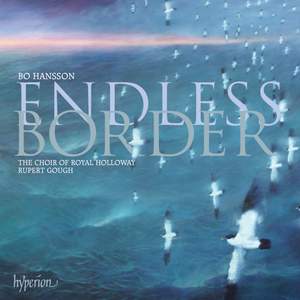 Hansson, B: Then I heard the singing

Hansson, B: For as the rain

Hansson, B: The place amongst the trees

Hansson, B: Lighten mine eyes

The Swede Bo Hansson is a man of many talents: a guitarist, and a composer of a wide range of music in folk and jazz idioms. Choral music might be a relatively recent departure for him but its roots run deep, back to the days of his childhood when he sang as a treble in his local choir. He has observed that ‘the human voice is the closest you can come to your soul’ and in that search he writes music that demands much of its performers in its sustained intensity of sound, a penchant for a cappella and a fresh way with word-setting even in the most established of texts, as in the darting energy of the Gloria from the Missa brevis.

Rupert Gough and his Royal Holloway Choir are no strangers to Hyperion, having previously made waves in music by Baltic composers Miškinis and Dubra. Here’s yet another sign that he’s one of the most exciting choral conductors of his generation.

The three dozen voices of the Royal Holloway Choir bring impressive reserves of stamina and concentration to bear on these sometimes difficult pieces.

the composer finds in [the Choir of Royal Holloway] sympathetic advocates, and his music shows off their strengths to great advantage...It is their confident and committed performance that warrants a recommendation from the objective listener; those to whom an appreciation of this idiom comes naturally will find much to enjoy.

the eight pieces on this CD (four of which are first recordings) fall very pleasantly on the ear, and every so often Hansson will deliver a phrase, a gesture, a passage that is genuinely striking; there's also a Waltonian matter-of-factness to the writing which can be attractive.

the music on this disc is consistently good; Hansson’s beginnings as an arranger of folk and popular song have helped him develop gifts as a writer of contemporary choral music that really does exert a grip...Rupert Gough’s young choir make a glowing sound, recorded in an acoustic which gives them plenty of air but never clouds the detail