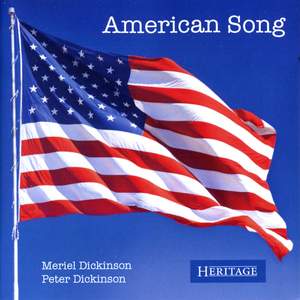 these recordings also have authority as well as boundless expressiveness and enthusiasm. It’s a wonderful musical voyage to the New World. — International Record Review, November 2014 More…

Gershwin: Girl Crazy: I Got Rythm

Gershwin: Shall We Dance: They All Laughed

Why Do They Shut Me Out of Heaven?

Heart, We Will Forget Him

Sleep Is Supposed to Be

I Felt a Funeral in My Brain

The Dickinsons, who flourished from the late 1960s to the early 1990s, performed works by Copland, Carter and Thomson for the composers themselves and their performances, which are captured on this disc, including the Cage cycle, were first recordings, as is Copland's late piano piece Night Thoughts. As such, it is an important and historic release for those interested in American music.

‘Thank you so much for sending me your excellent recording. I have listened to the performances with the greatest pleasure. Your playing is absolutely topflight, and your sister’s command of the Gershwin style, let alone all the others, is superb.’ William Schuman

these recordings also have authority as well as boundless expressiveness and enthusiasm. It’s a wonderful musical voyage to the New World.

Meriel Dickinson’s mezzo is in fine fettle, and she thrillingly embraces the stylistic extremes of Copland’s ecstatic “Going to Heaven” and the eccentric speech-song of Virgil Thomson’s Portrait of FB.