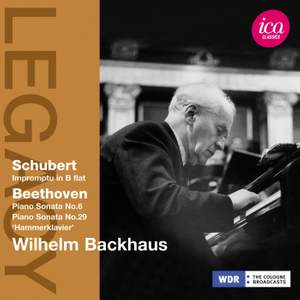 His concert begins with Schubert’s Impromptu No.3 in B flat major from the D.935 set. There is such facility and tonal lustre here, and a dappled, songful lightness propelled by the deftest of... — MusicWeb International, August 2012 More…

The great German pianist, Wilhelm Backhaus (1884–1969), made his first concert tour at the age of sixteen. He toured widely throughout his life, making his U.S. debut in 1912 (his final concert there took place in 1962 when he was 78!). Backhaus was well known for his interpretations and recordings of Beethoven, Mozart and Brahms and was also much admired as a chamber musician.

His 1909 abridged recording of the Grieg Concerto was not only the first recording of that work, but the first time any concerto had ever been recorded. Apart from this, he was also the first pianist to record the Chopin Études in 1928. He became a Swiss citizen in 1930 and reached the age of 85. The Times praised Backhaus in its 1969 obituary for having upheld the classical German music tradition of the Leipzig Conservatory.

These recordings have never been issued before on CD, and are in excellent sound for the period. This 1959 concert gives us a rare experience of hearing Backhaus caught ‘live’ in the Beethovenhalle in Bonn in a typical programme of Schubert and Beethoven.

The CD contains a great performance of Beethoven’s monumental ‘Hammerklavier’ Sonata. According to the pianist and Beethoven specialist Stephen Kovacevich, Backhaus was the only pianist to have understood the work.

The booklet notes have been written by the distinguished musicologist and writer Bernard Jacobson, who draws comparisons through Backhaus’s playing of the Schubert Impromptu in B flat major and Beethoven’s earlier sonata op.10 no.2 with his interpretation of the ‘Hammerklavier’.

His concert begins with Schubert’s Impromptu No.3 in B flat major from the D.935 set. There is such facility and tonal lustre here, and a dappled, songful lightness propelled by the deftest of left hand rhythms...In the great acres of the Hammerklavier, one finds Backhaus as committed and sagacious as ever...
This is a distinguished release, extremely well recorded, and well documented.