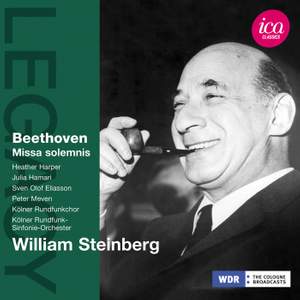 In Steinberg's Gloria, the choir's accent on 'hominibus' is just right: quiet, not overdone...Steinberg hammers out 'consubstantialem Patri' in fine style...Peter Meven intones the the opening... — Gramophone Magazine, August 2012 More…

He was celebrated as an orchestra builder, co-founding the Palestine Orchestra which became the Israel Philharmonic as well as helping one of his mentors, Arturo Toscanini, to form the NBC Symphony Orchestra. His other mentor was Otto Klemperer and, like Klemperer, Steinberg conducted and recorded Beethoven, Brahms, Bruckner and Mahler superbly together with a fondness for 20th-century works. Steinberg’s recording of Beethoven’s Missa solemnis has never been issued before on CD and is in excellent stereo.

In Steinberg's Gloria, the choir's accent on 'hominibus' is just right: quiet, not overdone...Steinberg hammers out 'consubstantialem Patri' in fine style...Peter Meven intones the the opening to the Agnus Dei with gravitas.

Steinberg impresses by keeping a firm hand on the tiller. Almost without exception I thought his tempi were judiciously chosen...Beethoven makes the most unreasonable demands on the chorus, the sopranos especially, yet the German singers never flinch and I admired the tenors who produce strong, incisive singing yet never force the tone