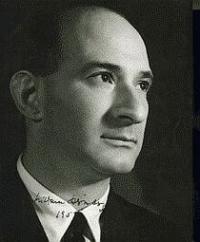 Born in Cologne, William (Hans Wilhelm) Steinberg showed an early talent for conducting and became an assistant to the greta Otto Klemperer in his mid-twenties, ultimately succeeding him at the Cologne Opera - the first of several operatic posts.

Dismissed from the Frankfurt Opera by the National Socialist authorities in 1933 - the brownshirts reportedly barged into a rehearsal in progress and physically removed him - he moved to British Palestine and worked with the forerunner of today's Israel Philharmonic. There he met, and made a great impression on, Arturo Toscanini, but his stay in Palestine was only brief, as he emigrated to the United States in 1938.

After several positions conducting orchestras in the USA, he became music director of the Pittsburgh Symphony Orchestra in 1952 - a post he held until 1976, despite persistent rumours that he was seeking to move elsewhere. Among the qualities that endeared him to both his musicians and his audiences was a rare ability to poke fun at himself and not take himself too seriously.

Find out more at https://en.wikipedia.org/wiki/William_Steinberg