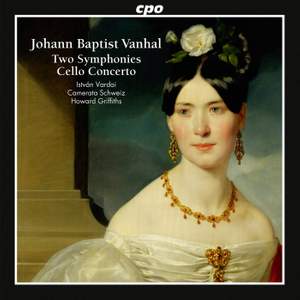 Johann Baptist Vanhal numbers among the most productive composers of the eighteenth century. Among other works, seventy-seven symphonies and sixty solo concertos by him are documented. He was for quite some time, especially before the works of Haydn and Mozart became more widely known, one of the most popular and even one of the most renowned instrumental composers in Germany.

Here we have three genuinely gripping works (the symphonies in première recordings) by Vanhal performed by the Camerata Schweiz under Howard Griffiths.