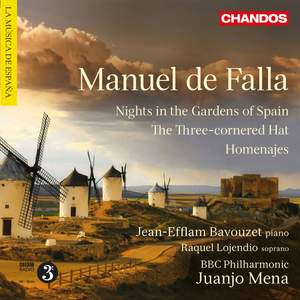 one of those experiences that change one's perception of a work forever...At the most basic level they take the trouble to get the balance right. ['Nights'] is no concerto, and the pianist has... — BBC Music Magazine, March 2012, 5 out of 5 stars More…

The works for stage and concert hall by Manuel de Falla starts off our new Spanish series with the BBC Philharmonic Orchestra and Juanjo Mena.

Nights in the Gardens of Spain is among Falla’s most impressionistic and poetic works, full of shimmering textures that recall Debussy, but with a hard-edged precision brought to the forefront by the piano. Each of the three movements is imbued with a strong sense of location. The first evokes the Generalife gardens of the Alhambra in Granada; the second, and most animated, displays a strong North African quality; and the third is inspired by the gardens of the Sierra de Córdoba. Here Falla’s lustrous and voluptuous writing is contrasted with a dramatic refrain full of energy, colour, and savagery, and the work offers one of the most sensuous endings in all music. It was performed by the BBC Philharmonic and Juanjo Mena, as part of the conductor’s debut performance at the Proms in 2011. On this recording, they are joined by Jean-Efflam Bavouzet, the exclusive Chandos artist and multi-award winning pianist.

Based on the novel by Alarcón, The Three-cornered Hat was commissioned in 1916 by the impresario Diaghilev for his Russian ballet company, the Ballets russes. Centred round sexual jealousy, possessiveness, mistaken identity, and deception, it tells the story of the failed attempts by an elderly local magistrate (whose three-cornered hat is a symbol of authority) to seduce the miller’s lovely wife. The music is exuberant, the principal characters wittily characterised, and the original production itself boasted an incredible wealth of talent: choreography by Léonide Massine, set and costume designs by Pablo Picasso, and the star ballerina Karsavina dancing the part of the miller’s wife. It was one of the company’s greatest successes, and put Falla on the international map as a composer.

Also on this disc is the Homenajes, in which Falla pays tribute to fellow musicians and composers. ‘Fanfare sobre el nombre de Arbós’ was written for the seventieth birthday celebrations of the conductor Enrique Fernández Arbós, while ‘Pedrelliana’ pays posthumous homage to Falla’s teacher Felipe Pedrell, who had informed so much of his musical thinking.

one of those experiences that change one's perception of a work forever...At the most basic level they take the trouble to get the balance right. ['Nights'] is no concerto, and the pianist has to be an observer of the music's events rather than needing to boss them around...the level of engagement with the music is exceptional. Often spacious and dark, the performance reaches past its starlit, balmy surfaces to find the ache and stoicism of Spanish history

Mena’s hands the music dances the light-fantastic. The excellent Jean-Efflam Bavouzet is piano soloist in an atmospheric Nights in the Gardens of Spain, and Homenajes brings to light a little-known suite of elegiac beauty.

it is greatly to the credit of Juanjo Mena and his forces (with a truly authentic touch from soprano Raquel Lojendio) that such a potent atmosphere is achieved...[Bavouzet's] performance [of Nights in the Garden of Spain] is more subdued than from celebrated champions of this score...yet it casts its own spell, sultry and scintillating as required.

Mena and the BBC Philharmonic bring a rich palette of orchestral colours...Bavouzet’s shaping of the idiomatic gypsy phrases is superb. His playing encompasses a range of tone and touch to underscore the brilliant nature of the piano writing. I am not sure if this recording displaces de Larrocha’s great recordings of the work but it is superlative playing nevertheless.

[Bavouzet's] iron-hand-in-a-velvet-glove approach is perfectly judged for a work that is about much more than decorative flourishes, but there is still something that is far too safe and neutral about the orchestral playing.

The acoustics sound good and accommodating, with enough space to give the music air and a luminous glow, on which Mena capitalises in The Three-Cornered Hat, drawing a range of colour and atmosphere from the orchestra and getting its members to clap and shout “Oi!” with some gusto in the introduction. Light and shade are well delineated, as are the contrasts between sultriness and vitality.

You trust that the choice of repertoire on this release was driven by Mena himself, and this disc has loads to commend it – playing of real verve, and the more-than-decent acoustic of the BBC’s much-maligned Media City in Salford...Mena’s gift is to bring out the rhythmic zest, the hints of violence underpinning what can too easily sound like a sequence of musical postcards. Soprano Raquel Lojendio is superb