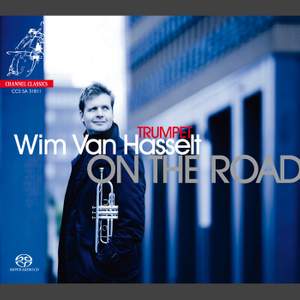 On The Road: Wim Van Hasselt

Luigini: Caprice for cornet and piano

Henderickx: ON THE ROAD for trumpet and electronics

once opened, never be closed

ON THE ROAD - looking for EXTREMES: Jack Kerouac's book On the Road saw the light of day in 1957. It was to become the cult book of the beat generation. To be forever-on-the-road was a new attitude to life, a present-day interpretation of the bohemian type, and it came to inspire generations of pop musicians. For the Arts, borders have always been irrelevant. Bach and Mozart sought inspiration in the music of all the countries around them. Bartók travelled endlessly and as far as Africa. The works on the present CD were written by composers from nine European countries: the Netherlands, Belgium, Germany, France, Switzerland, the Czech Republic, Scotland, England and Italy. Nothing less than a journey through the trumpet repertoire of Europe. Wim Van Hasselt selected the works on the grounds of quality and diversity.

Born in Belgium, his passion for the trumpet took him quickly to Louvain, Brussels and - new to him - the city of Karlsruhe, where he studied with Reinhold Friedrich, in the words of Van Hasselt "an icon in the trumpet world and a source of inspiration for this CD". Like so many music students, he went 'on the road' to find a good teacher. In Karlsruhe he got to know the Japanese pianist Eriko Takezawa, who accompanied him as répétiteur for his entrance exam at the Hochschule and has often played with him since. Then Van Hasselt's dream to play in the best possible orchestra took him to Berlin and Amsterdam. And this CD was yet another dream. "Not only to stretch my own boundaries, but particularly because I really want people to hear this music. I have looked for the extremes of trumpet repertoire and have compiled a varied programme with pieces in all sorts of colours and styles, ranging from classical through belle époque to contemporary."