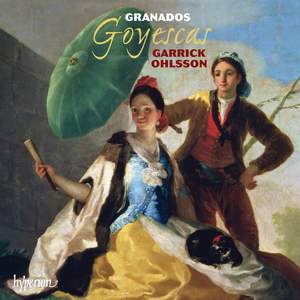 Ohlsson is very much the performer for the heart of the work - a woman's forlorn dialogue with a nightingale - and its ensuing tragedy. His feeling for the constant fluctuations of pace and mood... — BBC Music Magazine, April 2012, More…

Garrick Ohlsson injects some much-needed Mediterranean light into this dark time of year with Granados’s pianistic masterpiece, Goyescas. Written in the first decade of the twentieth century, it’s a musical tribute to the great Spanish artist Francisco de Goya, under whose spell Granados had fallen as a young man. Filled with a patriotic fervour for what he saw as a universally great Spanish genius, he wrote several pieces inspired by the painter’s life and times. The six pieces that make up Goyescas are no mere tone-poems but instead draw on details from Goya’s works—notably the Caprichos, a sequence of aquatints that satirized (and outraged) Spanish society. They draw on Spanish folk music too, as in the famous dialogue between the Maiden and the Nightingale, complete with a trilling cadenza at the end for the nightingale.

Another product of Granados’s preoccupation with the painter was the exuberant El pelele, which recounts the tale of a straw man being tossed on a trampoline, while the Allegro de concierto forms a fittingly brilliant endpiece.

Ohlsson is very much the performer for the heart of the work - a woman's forlorn dialogue with a nightingale - and its ensuing tragedy. His feeling for the constant fluctuations of pace and mood infuses the 'Maiden and the Nightingale'...a fine, warmly recorded all-Granados disc.

you can't go far wrong with Ohlsson, who could hardly be more affecting in 'Quejas, o La maja y el ruisenor', or more able to express the dark and glittering hearts of both 'El amor y la muerte' and 'Epilogo, serenate del espectro'

the style of the piano writing can be traced back to Chopin and Liszt. It's that side of Granados's music that is brought out in Garrick Ohlsson's technically immaculate performances. Other pianists might play up the music's nationalism, but it's the connection with the 19th-century mainstream Ohlsson emphasises.