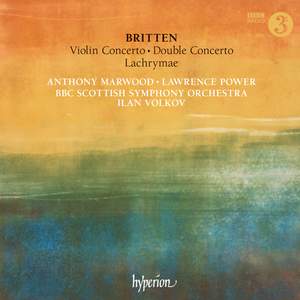 Aided by the alert Ilan Volkov, Anthony Marwood and Lawrence Power form a persuasive partnership...we are left in no doubt about the levels of searing commitment behind Marwood's performance.... — BBC Music Magazine, April 2012, 4 out of 5 stars More…

Long recognized as an outstanding chamber musician, Anthony Marwood has more recently been making waves as a concerto soloist, with two contributions to the Romantic Violin Concerto series and now a disc of Britten with the BBC Scottish Symphony Orchestra and Ilan Volkov. The youthful Violin Concerto, with its mix of anguished lyricism and changeability of mood nods to both Berg (whose own Violin Concerto had made a profound impression on Britten) and Prokofiev but the result is entirely personal.

The still earlier Double Concerto, for violin and viola, is impressive above all for its precocious confidence; written when Britten was just eighteen and still a student at the Royal College of Music, it had to wait sixty-five years before receiving its belated premiere in 1997 at the 50th Aldeburgh Festival. Anthony Marwood is joined by star violist Lawrence Power (who makes two appearances in Hyperion’s new releases this month). The viola was Britten’s own instrument and his Lachrymae, inspired by a Dowland song, brings us to the other end of his career, for though it was composed in 1950, it wasn’t orchestrated until 1976, the year of his death.

Aided by the alert Ilan Volkov, Anthony Marwood and Lawrence Power form a persuasive partnership...we are left in no doubt about the levels of searing commitment behind Marwood's performance. It's rounded off by Power's deeply thoughtful and refined account of the Lachrymae.

Has the opening Moderato’s edgy lyricism ever sounded so tantalisingly seductive? Marwood goes on to capture the sinewy vitality of the middle movement and, no less brilliantly, the quixotic moods of the closing Passacaglia...Power’s big tone and bewitching agility give [Lachrymae] a stature that belies its modest duration.

This is a lithe, spiky rhythmical performance, bristling with satire in the Shostakovich style, at speeds well ahead of Britten's own. There is some lack of aural beauty...but every phrase is highly charged...Could this be a more telling depiction of the 1930s than the bittersweet sentiment found on the composer's own recording decades later?

This is a highly distinguished recording, very intelligently planned and exceptionally well executed...For me, the greatest revelation on this disc is the Double Concerto...the performance on this disc by Marwood and Lawrence Power reveals it to be an astonishing achievement as a work of art on several levels...Volkov has this style of composition almost in his blood and follows Power admirably [in Lachrymae].

Marwood plays with a rich and singing tone, making light of the technical difficulties...The orchestra perform the difficult second movement with impressive precision and together with Marwood and conductor Ilan Volkov this is a tremendously committed and touching performance.

Anthony Marwood can hold his bowing arm high...with this bittersweet, sinuously virtuosic account of a work that repays repeated listening and vindicates Britten’s faith in it. He is joined by Lawrence Power for a sumptuous account of the early (1932) Double Concerto...A brilliantly planned, played and recorded release.

This latest version is one of the best so far. Anthony Marwood's slightly detached, rhythmically incisive playing suits the dry, distantly neoclassical world of the Concerto perfectly, and Ilan Volkov marshals an equally crisp accompaniment. Nevertheless, the performance of the Double Concerto for violin, viola and strings seems even more remarkable...it [is] made to seem a wonderfully distinctive and characterful work.

[Lachrymae is] exquisite, beautifully played here by Lawrence Power...Volkov’s BBC Scottish SO relish the first movement’s spiky, quirky invention and are a superb foil for Anthony Marwood in the central danse macabre [of the Violin Concerto]...It’s a compelling work, and this is a wonderful recording.