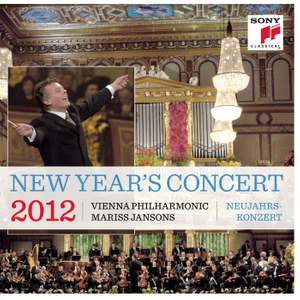 There's nothing here that disappoints, and the stylishness of the performances can be taken for granted, if not by the musicians themselves...the recording is excellent in capturing a happy occasion. — International Record Review, May 2012 More…

Recording of the Week,  New Year’s Concert from Vienna

Mariss Jansons presides over the celebrations for the second time in his career in a sparkling, imaginative-planned programme which includes two little nods to the forthcoming London Olympics as well as the perennial favourites by the Strauss Family, Ziehrer and Hellmesberger.

Sony Classical is pleased to announce the release of the recording of one of the world’s most famous classical music events: the 2012 New Year’s Concert with the Vienna Philharmonic. Latvian conductor Mariss Jansons returns to direct the 2012 celebrations after his acclaimed debut in 2006. The live recording encompasses releases on CD, DVD and Blu-ray.

The annual New Year's Day Concert in the stunning Vienna Musikverein has been an exalted tradition for more than seven decades, and the resulting recordings with works from the Strauss dynasty and their contemporaries are among the classical market's most important releases. The concert will be broadcast on TV and radio to over 70 countries around the world with an estimate of more than 40 million viewers.

The programme traditionally revolves around waltzes and polkas by the Strauss family (Johann father and son as well as Josef and Eduard Strauss) whose music has enjoyed a recent resurgence due to the success of André Rieu and his Johann Strauss Orchestra. In 2012 the programme is once again a skilful blend of well-known classics and six New Year’s Concert premieres. As always the concert is bound to end with two traditional encores – the famous waltz The Blue Danube and the Radetzky March.

“It is something quite special: a wonderful opportunity to listen to this music and get to know it. This atmosphere, the Vienna Philharmonic, the Golden Hall of the Musikverein – all that adds up to a long and wonderful tradition resulting in fantastic, very specific music.” Mariss Jansons

There's nothing here that disappoints, and the stylishness of the performances can be taken for granted, if not by the musicians themselves...the recording is excellent in capturing a happy occasion.

Jansons brings his characteristic poise and elegance to bear on the ‘Strauss Family and Friends’ programme to scintillating effect...The programme is imaginatively planned, with fast-and-furious polkas acting as a palette-cleanser between the lush waltzes.