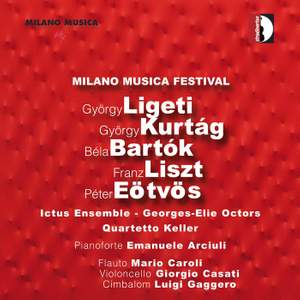 Szabadban, BB 89: I. With Drums and Pipes

While Ligeti asserted, in presenting the 'Kammerkonzert', that the work could be regarded as a “lighter treatment” of the Quartet No. 2, written two years previously, this could not be said of the virtuoso quality of the instrumental action. Rather, thanks to the broadening of instrumental resources, we can even observe still more sophisticated results in elaboration.

In the constellation of the works of Kurtág, the string quartet occupies a pre-eminent position, in which we find in the highest concentration all those parameters of writing and poetics which inform the entire work of the Hungarian composer. The 6 'Moments musicaux' for string quartet, dedicated to his son György, were written for the Bordeaux International String Quartet Competition (June 2005): they are six pieces with an expressivity which is distilled and explosive, spare and with palpitating incisiveness.

Bartók finished composing 'Szabadban' in 1926. More than a suite in a traditional sense, it is a collection with a common esoteric spirit of particular motives. Form, as always in Bartók, merges the strong immediacy of popularly-influenced inspiration with subtle and reflective construction, rooted in a cultivated humus.

'Hymne de la Nuit' takes place in the form of a lyrical hymnody. Here we hear the echoes of the rhetorical questions which fill Lamartine’s poem, which inspires the piece, the second of the 'Harmonies poétiques et religieuses', with its pompous and sentimental religious feeling. Also 'Hymne du Matin' is inspired by a poem by Lamartine, the third of the 'Harmonies poétiques et religieuses', in which an enthusiastic religious inspiration emanates an extraordinary variety of images and metres.