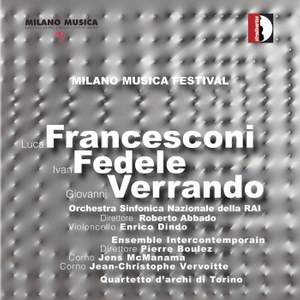 String Quartet No. 2, I. Inquieto - Intenso

'Rest', dedicated to Luciano Berio in memoriam, was composed by Francesconi in 2003 and commissioned by the Orchestra Sinfonica Nazionale della RAI. A sophisticated musician, the Milanese composer was careful to avoid falling prey to the seductive temptation of paraphrase and parody. He does not present, in 'Rest', citations from Berio, nor does he mimic the style. Rather, the piece is strongly permeated by a violent energy and by a multiplicity of absolutely authentic and personal lexical and expressive style motives, completely consistent with the original style that one notes in the now numerous titles of his symphonic catalogue.

As the title suggests, the concept of “resonance” is the central aspect of 'Duo en résonance', a composition by Ivan Fedele for two horns and ensemble dated 1991: this aspect inspires not only the idea of sound, but also the forms through which this idea is achieved. Giovanni Verrando studied in Milan with Giacomo Manzoni and Niccolò Castiglioni, then in Siena with Franco Donatoni and at the IRCAM in Paris, winning prestigious prizes, among which the “Togni” (1992) and the “Gaudeamus” (1995).

The composer speaks thus of the work: “The Quartetto n. 2 pursues that research into style founded on a relationship which is more physical with sound and more immediate with the musical line. […] Research, therefore, that appeals to [...] to a creative act that is not born from a cultural mediation (if not unconscious), but rather from a biological urge, freed as much as possible from academic restrictions”.