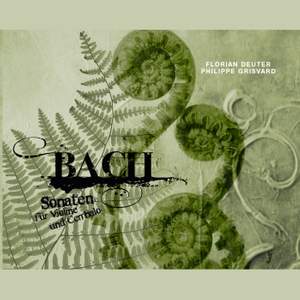 Bach, J S: Sonata for Violin and Harpsichord in B Minor, BWV 1014

Bach, J S: Sonata for Violin and Harpsichord in A Major, BWV 1015

Florian Deuter is one of the most sought-after baroque violinists of his generation. He has served as concertmaster and violinist of the Amsterdam Baroque Orchester (Ton Koopman), The Gabrieli Consort (Paul McCreesh), La Chapelle Royale/Collegium Vocale (Philippe Herreweghe). At the behest of Reinhard Goebel, he served as first violin and concertmaster of Musica Antiqua Köln for six years and with this group toured the world and recorded extensively for Deutsche Grammophon.He has recently recorded the sonatas of J. S. Bach with harpsichordist Christian Rieger. Since April 2000 Deuter has been the concertmaster of the Musiciens du Louvre (Marc Minkowski). and in 2003 he founded the chamber music group Harmonie Universelle. Audad.com called his Vivaldi Concertos set, also for Eloquentia “One of the best Vivaldi collections to appear in recent years”.