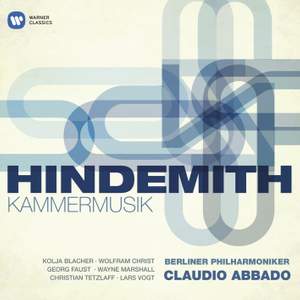 Hindemith: Kammermusik No. 2 Op. 36 No. 1 Klavierkonzert

Hindemith: Kammermusik No. 4 Op. 36 No. 3 Violinkonzert

Paul Hindemith (1895-1963) is a greatly misunderstood composer. General opinion would have it that his music is rather dry, academic and lacking in humour but this is very far from the truth, as this set of his complete Kammermusik beautifully illustrates. The seven Kammermusik (Chamber Music) were written in the 1920s and are the first works of Hindemith's maturity, at a time when he had already established himself as one of the leading young composers in Germany. Hindemith's music here is very much of its time, being a thumb-to-nose reaction to the romantic excesses that had gone before. Kammermusik No.1, written in 1921, reflects the composers earlier experience as a performer in dance bands and musical comedy orchestras; Nos.2-7 are all concertos, each for a different soloist and instrumentation, that in essence have a more than passing resemblance to the Brandenburg Concertos of Bach.