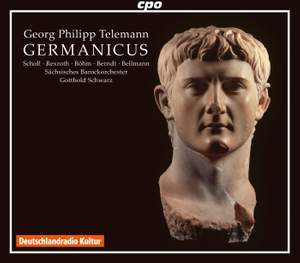 the vivacity of the writing is breathtaking. Under Gotthold Schwarz, the Saxon Baroque Orchestra relishes every affect of this exuberant score, while Elisabeth Scholl's expressive Agrippina,... — BBC Music Magazine, April 2012, 4 out of 5 stars More…

CPO is proud to present the world première recording of Georg Philipp Telemann’s opera Germanicus. Telemann had made reference to writing twenty operas during his four years in Leipzig, but sadly the scores have been lost and very few librettos and arias are extant. Michael Maul has proven that some 40 arias discovered at the Frankfurt University Library were from Telemann’s Germanicus and its modern premiere took place with Gotthold Schwarz and the Saxon Baroque Orchestra.

Germanicus is a tale of love, lust and political intrigue based very loosely on events during the first-century occupation of Teutonic territory by the Romans. Since only arias survive, for recitatives Maul substituted a tongue-in-cheek narrative wittily delivered by actor Dieter Bellmann.

the vivacity of the writing is breathtaking. Under Gotthold Schwarz, the Saxon Baroque Orchestra relishes every affect of this exuberant score, while Elisabeth Scholl's expressive Agrippina, Tobias Berndt's heroic Arminius and Friedrich Praetorius's perky Caligula head a sturdy cast. There is a great deal in this recording to enjoy and admire.

In summary, this is a mixed success. Opera lovers will be disappointed by the absence of anything in the nature of real drama and readers in general may find their enthusiasm tempered by uneven contributions from the vocalists. What does carry the day, though, is the music, itself. Many hallmarks of Telemann's style are already present in these mainly delightful arias...Well worth exploring, caveats notwithstanding.