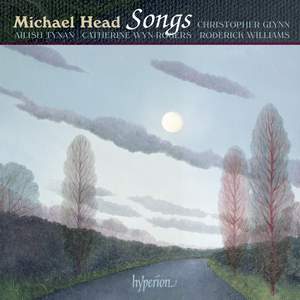 Head, M: Over the rim of the moon

I. The ships of Arcady

Head, M: Had I a golden pound

Head, M: Lean out of the window

Head, M: My sword for the King

Who is Michael Head? His name may be largely forgotten but the music here forms part of the rich seam of English song in the manner of Quilter, Gurney and Warlock. Born in 1900, he worked modestly as a singer, pianist, teacher, broadcaster and adjudicator, writing his first song (The ships of Arcady) aged 19, studying at the Royal Academy of Music, where he became a professor of piano aged 27, remaining there for the rest of his career.

At the centre of his composing life were songs, which he used to perform as a kind of one-man band, accompanying himself at the piano. Out of more than 100, here’s a choice selection: setting poets such as Walter de la Mare, John Masefield and Christina Rossetti, many of them focus on the pleasures of England—its flora and fauna, its changing seasons and lyrical landscapes.

They’re sung by three of the brightest stars in today’s vocal firmament, Ailish Tynan (making her Hyperion debut), Catherine Wyn-Rogers and Roderick Williams, accompanied by Christopher Glynn, who adds Head to his previous recordings of Reger and Brahms.

Head created the most inventive and sympathetic writing for voice and piano, in asymmetrical, free-flowing, artful settings of poets such as Walter de la Mare, John Masefield and Christina Rossetti. His music heightens their acute observations of the natural world, expressing their appetite for the present, fleeting moment...A revelation.

Head makes sure England’s fields are forever green, even when the mood is tinged with sadness: not for him the slightest inelegance. The apportioning of songs to soprano, mezzo and baritone gives the recital an easy pace. Williams’ flawless diction makes his the pick of the bunch.

the enterprise of Hyperion knows no bounds. Here is a disc devoted to songs by Michael Head, who is not likely to be known to many...Singers and pianists perform with conviction and style. If you can, start with 'Limehouse Reach', which has the charm and simplicity of Vaughan Williams's 'Linden Lea', and take it from there.

[Wyn-Rogers] is laudable in the very sad, well-named Love's Lament...The two lustiest songs, 'Money, O!' and 'My sword for the King' are allotted to Roderick Williams, who brings bold vocalism to both...Christopher Glynn brings out the different colours in accordance with each song, from crashing chords to gurgling gruppetti, sparking little scales to vigorous outpourings or soft sweetness.

as the meticulous performances by these singers...demonstrate, Head was acutely sensitive to words. There are settings of Masefield and Yeats, Hardy, Joyce and Christina Rossetti here, and in every song each phrase is perfectly balanced, its meaning directly communicated, its accompaniment supremely tactful.