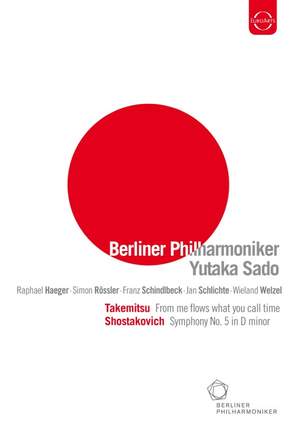 Recorded live from the Philharmonie, Berlin, May, 20th 2011

[Sado] digs unostentatiously deep in both the fluid and monumental aspects of this concert, given to raise funds for the Japanese earthquake and tsunami disaster. Much in the two chosen works... — BBC Music Magazine, March 2012, 4 out of 5 stars More…

Takemitsu: From me flows what you call time (for five percussionists and orchestra)

This production is a Charity Concert for the victims of the Earthquake and Tsunami Disaster from March 11th 2011.

The profit generated will be donated to a special section of the Japanese Red Cross Society (JRCS), which was especially founded for earthquake victims: “Japan: Earthquake and Tsunami”, and will therefore be distributed directly among the population affected. Immediate help for the Japanese people in need is thus guaranteed.

With this concert Yutaka Sado makes his Philharmonic debut and will be the first Japanese to conduct the renowned orchestra since Seiji Ozawa several years ago.

Critics have unanimously hailed Yutaka Sado as one of the most enthralling and charismatic conductors of the new generation. The long-time assistant of Leonard Bernstein and Seiji Ozawa was awarded the most important conductor’s prizes, e.g. the Premier Grand Prix at the 39th International Conducting Competition and the Grand Prix du Concours International L. Bernstein Jerusalem.

[Sado] digs unostentatiously deep in both the fluid and monumental aspects of this concert, given to raise funds for the Japanese earthquake and tsunami disaster. Much in the two chosen works is both complementary and appropriate...A short interview with Sado tells us little; but what he achieves in performance is unquestionably beyond words.

I like Takemitsu best when there's rigorous tension put between his soft-focus, stylised figurations...Here the balance is perfect...After Takemitsu, Shostakovich's urgent 'listen to this' message, each harmonic sidestep loaded with interference, is a shock. I like the dynamic detail Sado lavishes on the first movement...And another sound reason to buy this DVD: all proceeds will be donated to the Japanese Red Cross to help victims of the 2011 tsunami.

a performance of alluring poise. Some may find the seamless tonal blend and peerless technical accomplishment over-manicured (even counter-productive) bearing in mind the music's historical context, but taken on its own terms one can hardly help but be galvanized by its supreme expertise.