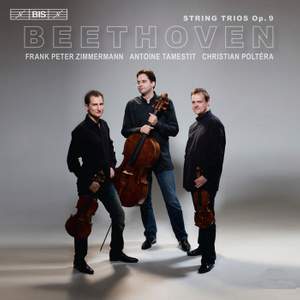 The playing itself is dazzling, combining expressive warmth and admirable clarity: I don't think I've ever heard the presto finale of the first Trio dashed off with quite such transparency and... — BBC Music Magazine, February 2012, 5 out of 5 stars More…

For their second release on BIS the Trio Zimmermann play Beethoven’s String Trios Op.9 – a set of three that the composer himself upon their completion described as the finest of his works.

With their concentrated sonority, intense drama and striking formal disposition, the Op.9 trios mark the highlight as well as the end of Beethoven’s production for string trio before he went on to compose quartets instead.

With each of its members enjoying distinguished solo careers, Trio Zimmermann is truly a world-class ensemble. Frank Peter Zimmermann, Antoine Tamestit and Christian Poltéra first joined forces in 2007, and have since performed together in the most important musical centres of Europe, including the Salzburg and Edinburgh Festivals.

The trio’s first recording, of Mozart’s Divertimento K563 (BISSACD1817), was released in 2010 and has met with worldwide critical acclaim.

The playing itself is dazzling, combining expressive warmth and admirable clarity: I don't think I've ever heard the presto finale of the first Trio dashed off with quite such transparency and lightness of touch...All in all, this recording is a real treat.

These musicians are in command of the meticulously written extremes in expression, sforzandos not indiscriminately stabbed at but gauged according to the contexts in which they appear. Tempi are gauged to a nicety too...In sum, they do Beethoven proud throughout this exceptionally fine disc, enhanced by BIS's clean SACD sound.

From the expressive phrasing of the slow introduction of Op. 9 No. 1 it's clear that the playing not only has unusual commitment but real imagination too. What's more, the richness of the sound generated by these three players is ideal: never too full but always warm and wonderfully balanced. Speeds, too, are beautifully judged...for anyone looking for these works now, I'd say that this new BIS disc...sits at the top of a distinguished list.

Displaying impeccable teamwork the players give these splendid Beethoven scores with a spring in the step and a sparkle in the eye yet they also draw deep to achieve a remarkable gravitas to set alongside an abundance of spirit in these assured and tasteful performances. This marvellous BIS disc was a delight from start to finish

played with fire and subtlety by the outstanding Trio Zimmermann